Miguasha National Park is considered to be the world's greatest palaeontological record of fossils from the Devonian Period, known as the 'Age of Fishes'.

Five of the six main fossil fish groups from this period (dating from 370 million years) can be found here. A great quantity of some of the best-preserved fossil specimens of lobe-finned fish, ancestors to the tetrapods (believed to be the first four-legged air-breathing terrestrial vertebrates), were found here.

These coastal cliffs are made up of grey sedimentary rock (composed of alternating layers of sandstone and shale) which are 350-375 million years old. Some of the fish, fauna, and spore fossils found at Miguasha are rare and ancient species.

The further north I drove from the provincial capital Québec towards Miguasha, the more dramatic the scenery became: fast-flowing rivers for salmon fishing, dense forests, and the first ‘real’ mountains: the Appalachians. Kilometers before the exit from the highway, the Miguasha World Heritage Site is already signposted. Encountering a prominent sign like this always makes me happy, especially on this trip as ones with the UNESCO logo are quite rare among Canadian WHS.

I visited the park at the opening hour of 9 a.m. and at the visitor center they had to unlock the door for me. That center is of an impressive size by the way, compared to the relatively small site it covers. The girl at the reception started her enthusiastic explanations about what you can do here in Quebec-French. Fortunately, I kind of knew what I wanted to see and do already because most of this dialect completely passes me by.

I am first led to a separate room, where the Elpistostege watsoni ("the King of Miguasha") can be seen. This complete specimen of the only fish of its kind was found as recently in 2010 (long after WH inscription) and apparently deserves special treatment.

In the 'regular' museum, the story is told of how the fossils were discovered. A geologist in search of coal found the first specimens in 1832. Later on, much more extensive digging and searching were done. Especially Swedish scientists were very active and paid local treasure hunters to ship material to Stockholm. It was not until 1972 that the area (a coastal strip of 3 kilometers long) became protected by the Canadian government.

The fish from this era do not all look like we know them now. One of the first finds is what looked like a turtle, but turned out to be a primitive fish with bone armor over the head and rib cage.

Other reviewers have already commented negatively on the 3.6-kilometer-long hiking trail through the forest which comprises the outdoor part of the exhibition – it takes away the focus of the fossils. But I would advise you to at least start it (and turn back after a few hundred metres), as at the beginning there is a staircase down to the beach and the cliffs where the fossils were found (and that's where the core zone is). The cliff is composed of alternating layers of rock and silt. The beach is full of pieces of slate. Especially after just having seen the fossils in the museum, I always think that I see similar imprints in the stones. With that idea in mind, the beach is a nice place to walk around for a while, you never know what you might come across!

Overall, it may be an unspectacular site, but I found it well-presented (including a bit of social history as well) and a fun way to learn about "ancient" fish. I spent two hours there in total. Admission nowadays is 9.25 CAD for the park and 11.52 CAD for the museum (together 16 EUR), both can be paid at the visitor center. 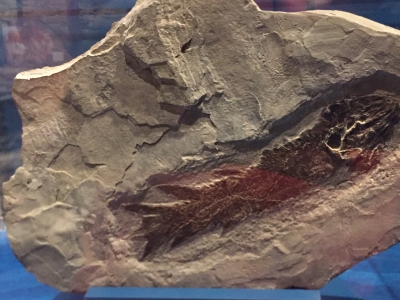 Known as the smallest National Park in Canada, this site is a gem, and the Visitor Centre is beautifully organized.  It is in a remote part of Quebec’s Gaspé Peninsula, and we stayed the night before in Carleton sur Mer, a resort area on a lovely bay near the park.  This area is known for its extremely old fish fossils of the Devonian Period.  Aside from the view, and wonderful exhibits, the geologists make the cliff tour interesting by leading the group on a discovery quest of looking for fossils. Using a tool to chip the rocks to uncover the hidden gems, and bringing a few back to a lab where a technologist cleans, enlarges, and identifies the pieces.  This gives an in-depth understanding of the process.  One hopes no precious things get damaged by amateurs, but the geologist does supervise carefully.  Heads up to the friendly and helpful staff. This was a memorable site and would also be beneficial for older children, at least 12 years of age and up. There was no Tour provided in English on that day, but I speak French and somehow managed to follow the process better than I had expected. English tours are limited in frequency so book ahead as much as possible!

The Miguasha National Park is the smallest national park in Canada, covering small part of sea shore with attached forest on the southwestern part of Gaspe Peninsula. It was created to protect one of the most important fossil sites in the world.

Entering the World Heritage Center tourists have three options - walk through the beach and the forest (approx. 7 CAD) or entering the museum (approx. 10 CAD) or of course both. I dare say that walk through the park is not worth money spent on it. The forest walk does not provide with any interesting views and unless you would like to repeat lesson of natural history (placed on several tables along the path) or look for mushrooms, you may skip it. The beach is a bit more interesting, although the chance to find any fossils there is virtually zero. It is just nice cliff and good (but common in Canada) sea view.

In contrary, I definitely recommend visiting the museum. We may know much more about Miguasha history and why the site is so important. In fact, it is the most abundant devonian fossil site on Earth. In the museum you may find great examples of well-preserved fossils found in Miguasha and, to some extent, taken from other places. I was particularly interested in tetrapods, fossils documenting one of the most important milestones in evolution of life - coming from water to land.

Although nice, I found Miguasha much less atractive than other Eastern Canadian fossil site - Joggins Fossil Cliffs. The tourists not interested in fossils may be a bit disappointed by this WHS.

I visited the park with some friends this summer (2005) and found it to a fascinating experience. Not only does the area have magnificent scenery, but there are plenty of hotels and restaurants where you will be served great food with great hospitality. It would be surprising if you were to walk the length of the beach and *not* find a fossil. The park employees and tour guides are great resources for information and the museum is laid out in an organized manner. You will leave Miguasha knowing much more about the history of the beach, the process of fossilization, our evolutionary past and the preparation of fossils. On a scale from 1-10 I give Miguasha National Park a full 10.

Miguasha is a remote park on southeastern edge of the Gaspe peninsula in Quebec but right on the border with New Brunswick. There is not much to see in the park but the museum is a visual pre-history lesson with lots of examples of the Devonian era fossils found at the site. Literally thousands of complete sea-life fossils have been found here and you can view the shale and sand cliffs where the fossils have been found but there is really not anything to see there. Most of the fossils are displayed in museums around the world but a few hundred are at the museum on-site. You must pay(C$8.00 in 2004) to visit the museum in order to make a visit to Miguasha worthwhile. Not many places to stay nearby. Drive about 30 km south for some small towns with motels.

Bureau - importance recognised but lacked context in which to judge comparatively. Centre to organise a study into sites covering Earth's evolutionary history

Fossils: In its representation of vertebrate life, Miguasha is the most outstanding fossil site in the world for illustrating the Devonian as the 'Age of Fishes'. (OUV, crit viii)
Fish: Crit viii: "The site is of paramount importance because it has the largest number and the best-preserved fossil specimens in the world of sarcopterygian fish"

Scientific Developments: Of great importance is the presence of the crossopterygian group of fishes, which share many characteristics with the tetrapods: (four-legged land animals). It was the discovery of one of these, the Eusthenopteron (the so-called “Prince of Miguasha”) which focused the attention of the international scientific community on the Escuminac Formation, giving rise to the modern conception of evolution from fish to land dwelling vertebrates. (AB ev)

Paleozoic: The fossils date back to the Devonian, "a geologic period and system of the Paleozoic, spanning 60.3 million years from the end of the Silurian, 419.2 million years ago (Mya), to the beginning of the Carboniferous, 358.9 Mya" (wiki)

Inscribed on a single criterion only: viii. to be outstanding examples representing major stages of earth's history, including the record of life, significant on-going geological processes in the development of landforms, or significant geomorphic or physiographic features
Name changes: national added (2004)