Nasqsh-e Rostam and Naqsh-e Rajab is part of the Tentative list of Iran in order to qualify for inclusion in the World Heritage List.

Nasqsh-e Rostam and Naqsh-e Rajab are mostly known for their bas-reliefs. They lie a few hundred metres apart. Nasqsh-e Rostam is an ancient necropolis, with reliefs cut into the cliff, from both the Achaemenid and Sassanid periods. Naqsh-e Rajab has four early Sassanid reliefs with inscriptions. 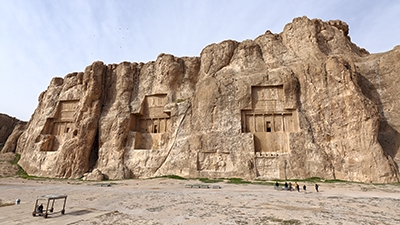 Site visited December 2015. This compact site is easy to dismiss only as a usual side trip from nearby Persepolis. The monumental necropolis of Persian kings with numerous rock reliefs is impressive enough to be a World Heritage Site. But there are certain reasons which make inscription complicated.

I guess almost everyone visit Naqsh-e Rostam and Naqsh-e Rajab on the same day trip with Persepolis so the logistics are the same. Just ask your chauffeur or taxi driver to stop at these sites before or after Persepolis. I visited this site after Persepolis and before heading to Pasargadae.

Naqsh-e Rostam 6 kilometres north of Persepolis is an ancient necropolis of four Persian kings from both the Achaemenid and Sassanid periods. These large tombs have been cut in to cliff face high above the ground. The facades of the tombs have been carved in the shape of cross. The entrance to each tomb is at the center of each cross. On top of the entrances are large carved panels. The horizontal beam of each of the facades is believed to be a replica of the entrance of Persepolis. Underneath the tombs are rock reliefs, the most famous of which shows the Roman Emperor Valerian held captive by king Shapur I.

The tombs are believed to belong to following kings: Darius I, Xerxes I, Artaxerxes I and Darius II. There is also a fifth unfinished tomb which is likely that of Darius III. The tombs were looted at the time of conquest of the Achaemenid Empire by Alexander the Great.

It is notable that exactly the same kind of cross shaped tombs that in Naqsh-e Rostam can be seen in Persepolis, on the hill behind the compound. These two tombs belong to Artaxerxes II and Artaxerxes III. The models of these tombs have been taken from Naqsh-e Rostam tombs.

Opposite of the cliff with the four tombs is a 12 metres high stone quadrangular structure Ka'ba-ye Zartosht or "Cube of Zoroaster”. There are several interpretations about the purpose of this structure. Most often it has been considered a fire temple or mausoleum.

Naqsh-e Rajab 3 kilometres from Persepolis has three fine Sassanian rock reliefs. It is worth a quick visit.

I visited Naqsh-e Rostam and Naqsh-e Rajab after Persepolis, and this didn’t take anything away from my experience. I remember that at Naqsh-e Rostam I was thinking why this is not inscribed. I don’t see any reason why this site could not be inscribed, maybe just that Iran has way too many potential TWHS. The problem might be that this site is both geographically and historically too close Persepolis. In that case it could be an extension of Persepolis. Anyway especially Naqsh-e Rostam is a monumental site with historical importance and also a great place to visit.

Due to >1 nomination proposed by State Part in same year