Guano Islands, Islets, and Capes National Reserve System is part of the Tentative list of Peru in order to qualify for inclusion in the World Heritage List.

Guano Islands is a network of islands, islets and protected capes along the Peruvian coast. This region is bathed by the rich waters of the Humbolt Current, which favours communities of fish and aquatic organisms that are not only abundant and diverse, but also exhibit a high level of endemism. These communities in turn support very large populations of marine mammals (25 species), but also of birds, which have enabled the industrial exploitation of guano as a fertiliser. 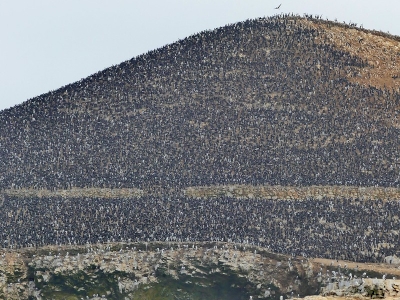 I visited this tWHS as an easy stopover between Lima and the Nazca Lines in June 2019. Several boat trips take tourists on a 2 hour (sometimes bumpy) speedboat ride around the Ballestas islands and islets known as Guano islands.

From my photo of one of the islets with quite a high hill, you can easily identify why these islands and islets are called Guano islands! Guano (bird poop) is a highly effective fertilizer due to its exceptionally high content of nitrogen, phosphate and potassium: key nutrients essential for plant growth in agriculture. Guano was also, to a lesser extent, sought for the production of gunpowder and other explosive materials.

If you keep your eyes peeled (on a clear day, far on the horizon) you will also be able to spot the tiny Chincha islands and islets. Peru began the export of guano in 1840. Spain, desiring the guano profits (quickly depleted by the 1870s), occupied these islands in April 1864, setting off the Chincha Islands War. It's quite interesting that the demand for guano spurred the human colonization of remote bird islands in many parts of the world, resulting in some of the first examples of US colonialism and the expansion of the British Empire.

The 2 hour boat trip (no landing permitted) provides an excellent opportunity to view El Candelabro, a large-scale geoglyph on what looks like a sand dune, as well as fur seals, sea lions, and a variety of birds such as Humboldt penguins, Inca terns, Peruvian boobies and pelicans, turkey vultures, and countless guanays.

I don't know if this will ever become a WHS, however it is definitely a worthwhile stopover to enjoy some fauna. For those of you who have a sweet tooth, after the boat trip make sure to try the delicious tejas de Ica, sugar coated balls of soft caramel, fruits, nuts and/or chocolate. 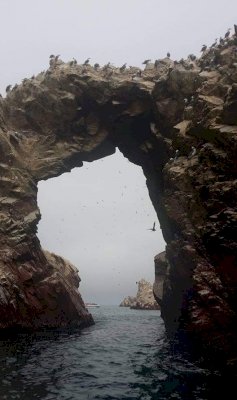 While on a trip through Peru with Peru Hop, the final overnight before reaching Lima was Paracas. I jumped at the opportunity they presented me there - a visit to the Ballestas islands, often referred to as Peru's "poor man's Galapagos". The tour took around 2 hours, all of it on a boat and starting at around 7:00 in the morning, leavong from the main pier of Paracas. The boat first passes by a huge geoglyph carved into the hillside, the "Candelabra". As we approach the island, numerous flocks of birds start flying overhead, and the odor of guano gets stronger and stronger. At last, we started to see the islands more clearly, and I realized why the smell was so strong. Thousands of birds covered the surfaces of the island. There were the usual gulls, as well as boobies, cormorants, pelicans, and even penguins. On the little rocks jutting out of the sea, sea lions bark noisily. In fact, the noise from the sheer amount of wildlife is almost as overpowering as the smell of the guano. Apparently, guano used to be harvested on the islands, as evidenced by the ruined buildings, but the industry was stopped to prioritize the wildlife, and I sure am glad with that choice. Such a dense ecosystem was truly a wonder to behold, and even without the diversity of the Galapagos, it's a very rewarding wildlife-viewing site to visit. Though we didn't see them on the tour, they say dolphins and sea turtle are also among the inhabitants here. I'd say Ballestas alone, or combined with nearby Paracas Reserve, would already make a worthy new World Heritage Site. 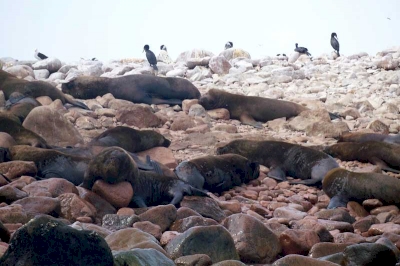 This nomination includes a large amount of islands and I am not sure if all would be inscribed, if that ever happens. I visited the one place that would surely be the heart of this nomination: the Islas Ballestas. The islands are an easy day trip from Paracas. It is not allowed to land, but the boat drives by very close so you can spot the abundance of wild life. We saw sea lions, penguins, pelicans, and many other birds. You can clearly see and scent the guano all around the island. Truly an unforgettable experience and highly recommendable if you are in the region.

Paracas is best reached by overnight bus from Lima. It’s on the Lima-Arequipa route, same as Nazca WHS.