The Episcopal See of Egara

The Episcopal See of Egara and its pictorial decoration (5th-8th centuries) is part of the Tentative list of Spain in order to qualify for inclusion in the World Heritage List.

The Episcopal See of Egara is an architectural complex of three pre-Romanesque churches located in the town of Terrassa, north of Barcelona. The wall paintings in the altar rooms of the three churches of Santa Maria, Sant Miquel and Sant Pere are examples of Christian art from the early Middle Ages, between the 5th and 8th centuries.

Map of The Episcopal See of Egara 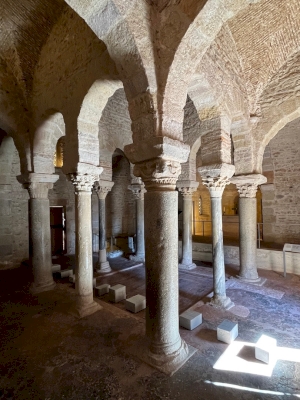 Tarragona is an easy and interesting day trip from Barcelona and one day is just about the time to see it all. Beside the three churches of the episcopal see it offers a quite remarkable heritage of Modernism.

The three churches were the seat of a bishop at visigothic time when the belief was supposedly Arian and not catholic. As Wikipedia tells us this constellation of three (and sometimes even more) churches was typical for early episcopal seats even within Catalunya and similar groups are documented in Valencia, Vic and La Seu d'Urgell (which bears the episcopal see still in its name). As far as I could find out all of them are lost in which case Tarrassa would be unique just for this constellation alone.

The nomination focuses clearly on the preserved frescoes and artwork from the 5th to 8th centuries. But we find quite some confusion: While Wiki states that it is not even sure if this group of three churches as it is was even built before the 9th century the detailed map that you get when you enter the museum tells a different story: it is organized with five colors which mark the different time periods: The first marked period is called "Iberian and roman period" and contains primarily tombs all over the area. The second is called "First Christian structures (4th century) and contains just a few now invisible walls to the NE of the church of Santa Maria. The third period is called "Egara episcopal buildings (5th to 8th centuries)" and marks the period of interest for the nomination.

Following the map the following parts are from this visigothic period: I limit my list to the parts that are above ground and visible for us:

- The complete episcopal palace in the entrance building now only foundations including the remnants of a baptismal pool with water pipes.

- From Santa Maria (the actual Cathedral church) the apse and several small constructions in the floor of the nave which you can see through glass panels. Unfortunately they are not described anywhere and I found them hard to figure out. One looked like small (baptismal?) pool. The large colorful fresco of Thomas Becket (I am often surprised how far his cult spread) in the southern transept is of later origin. The nave of this church was in visigothic times much larger than now, more then twice as long.

- The middle church of St. Michael seems to be almost entirely from the period. I was first considered a baptistry and now, what a change!, a funerary chapel. It has a enchanting quadrangle of nine pillars in the centre and it also feels most coherent and certainly it is the most beautiful. The eastern apsis contains partly preserved frescoes from the time featuring Christ and the apostles.

- The church of St. Peter served and still serves as a parish church. The apse is again from the time and also the crossing. The apse contains a unique altarpiece, unique in the sense that I have never seen anything like it: It shows several paintings or drawings in color of which one can easily recognize the symbols of the four evangelists and several angels.

The last to periods on the map are "9th to 13th centuries" and "14th to 21st centuries", but they are of no interest for this nomination. The ground around the churches is tiled in different colors and shapes to mark the finds from the different periods. So it gives the impression the this area is really well researched to every square inch. As often in Spain the research seems done, everything is nicely prepared with paths but the final step to make for a great visitor experience has been skipped. There is a nice short video in the museum but there are hardly any signs anywhere. Especially the excavation in the palace and the church of Santa Maria definitely cry out for more explanations. This would be no effort at all since all the research is done. I find this really hard to understand.

With contradicting information it is hard to figure out for the visitor what the exact age of these churches and their different parts is. This is even more important since the preserved art is not really overwhelming (on a global level) in its state of preservation nor in its artistry and therefore its age (and the rarity of such finds from this period) is the main argument for inscription. To me the unusually sculpted altar piece was the most remarkable of them but I was more fascinated by the group of the three churches and there connection and the beauty of the small church of St. Michael with the pillars. This reminded me strongly of the Asturian momuments especially of the church of San Miguel de Lillo (also dedicated to St. Michael!). I really loved the Asturian churches I saw and there quaint preromanesque style. Compared to them the churches of Terrassa are less original except perhaps for San Miguel in Terrassa. Since the Asturian churches are from the 9th century the churches from Terrassa have to be clearly older to contribute something unique to the list. Since there are several churches from the concerned period for example in Rome comparisons should also be made to them and their frescoes and artwork. But there is also another approach to this site I could imagine: From the important visicothic period very, very little architecture is left: There are just very few visigothic churches preserved on the Iberian Peninsula: Santa Maria de Lara in Burgos, Saint Frutuoso Chapel in Braga (which looks very nice) and the church of São Gião in Nazaré (which seems in a bad state). Perhaps a small serial site would make sense?

While you are there:

Terrassa offers clearly more then this interesting group of churches and it would be pity to miss it. Very near the Seu is the Carthusian of Vallparadís Castle: A small but handsome castle with the local history museum which is certainly closely linked to the Seu. Unfortunately it has other closing days than the Seu and I found the doors closed. While the gothic cathedral in the centre is not really remarkable the Modernism heritage is. The centre is quite full it and it is certainly worth exploring the area for an hour or more. You find a huge modernist market hall: There are so many of them in Catalonia that you wonder if nobody ever thought of making a serial site (the same could be true of modernist wine cellars!). Casa Alegre offers a museum with beautiful modernism interiors but I found closed too. Several former industrial buildings are turned into museum, such as the Museum of Science and the Sala Muncunill, both certainly attractive from the outside. Two industrial heritage sites are a short walk from the centre: The Chimenea de la Bòbila, a large industrial chimney with open spiral stairs around it leading to the top. It is not accessible but I would probably not make it to the top anyway for vertigo. The most unusual building is certainly the Masia Freixa: Built by a student of Gaudí it was first a factory, then a patrons home, now the local tourist office. I is all white like a wedding cake and looks a bit like a smurf house. I found it certainly one to the most unusual modernism buildings I have seen. The tourist office seemed not very professional and helpful but during opening times you can walk inside and admire the unusual interior with the chain arches that are clear copy of Gaudí's arches.

This site was added to the tentative a short time before I was supposed to be in Barcelona. I drove to Terrassa before heading into town (yes, I drove into Barcelona and even parked free and safely outside my apartment ;) I did actually book a place to park nearby which I still highly recommend, parking in general looks like a *****). I arrived a bit early not knowing the opening hours and had to wait around, but eventually the ticket office sold me a ticket and I was allowed to go inside ten minutes early. First you see the "museum" part with glass walks. Nothing is really great here. The main attraction is outside.

Three churches are outside, but these aren't actually the original churches. The pamphlet explains it nicely that there are several layers of church history built upon it, almost like the city of Troy just no mythical wooden horse. So of course my first question is what they are really inscribing here, as the old section is buried under others, but the title clearly points out the "5th-8th centuries" decorations which aren't anything special to me - surely they can be unique as the document state. You can see sections of it, with some under glass panels at the museum. The current churches are from the 11th and 12th century.

The first two churches offer very little to see, and the only large one, San Pedro, is still used a regular church. The documents point to "unique" 11 times. I have more of a feeling this is a niche that merges several styles across Europe which makes it seem unique. Excuse my layman's terms.

p.s. sorry I couldn't find my pictures for this, maybe I actually did not take any :o I wouldn't be surprised, or it's not allowed, I forget.

Unesco Website: The Episcopal See of Egara and its pictorial decoration (5th-8th centuries)