Turó de la Seu Vella de Lleida is part of the Tentative list of Spain in order to qualify for inclusion in the World Heritage List.

The Turó de la Seu Vella de Lleida is a hill (Catalan: Turó) in the centre of the city of Lleida in western Catalonia. The hill is the location of a monumental complex consisting of La Seu Vella (Old Cathedral), the remains of the Castillo de la Suda (Castle of the King) and fortifications from the 17th to the 20th century. The Seu Vella is the most outstanding building of the complex. It was built in the 13th century in a transitional style between Romanesque and Gothic. 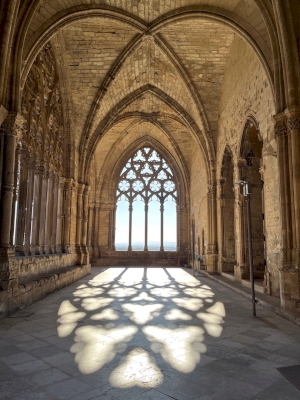 I visited Lleida as a detour traveling from Tarragona to Barcelona. I takes about one and a half hours from both cities. I arrived in the afternoon and when I walked from the train station to my hotel I was first a bit shocked how run down the streets looked in the very centre of the city. Thanks to covid a had found a rather cheap four star hotel near the station which I find always the best choice if you travel with public transport and luggage. But the hotel fitted quite oddly into the neighborhood with visible signs poverty everywhere. After dropping my luggage I walked up to the city hill which is the nominated area of this TWHS: It contains the old cathedral with a tower and cloisters, the remnants of a castle and large fortifications from several centuries. As soon as I came closer I got first views of this impressive hill with its fortifications and the beautiful church tower watching over the city. I walked first around the big cathedral building. On the back side I enjoyed two large portals with geometric patterns and figurativ capitals which showed Italian, French and even Norman influences, recognizable on the first glance. Later I read that the local stonemasonry was famous at the time and combined several influences. As often on this trip it took me a while to figure out where the entrance was and were I should buy my ticket. Since the weather was rather bad (as rarely on this trip) and therefore the light as well I decided not to visit the church and cloister since in my experience bad light can not only ruin your pictures but also the impression a place makes on you. I bought a ticket and walked up to the castle of which only a very small part is still standing. The rest was destroyed in several stages, among others Napoleon was also active there. So the castle was a very quick visit: One big medieval hall with hardly anything in it and a platform on the tower with a view in all directions. After that I walked around the hill as far as it was easily accessible. The fortifications are really extended but otherwise not unique to my eye.

I went down to the old town to the west of castle hill and found the old church of Sant LLorenc closed. Only the Lleida museum was open, at once the historic und the diocesan museum in a modern building. The access was first a challenge: As often or even mostly in Spain even the staff even at tourist places like museums do not speak any foreign language (except Castellan I suppose if you want to call it a foreign language) and it took me a moment to understand that the museum was closing in a short hour or so and that all texts in the museum were in Catalan, another strange fact I saw often on this trip. I was close to giving up when the lady handed me a rather large file with English texts. I took me a while to figure it out but then I saw that most of the texts in the museum were well translated. You had to find the right department and number and then you could find a solid English description. This was very enjoyable as the museum was not only new but very well done: Finds from the different historic periods were beautifully displayed, well lit and with a good spatial rhythm. This was possibly the best staged museum I visited in those two weeks so it is a must for any visitor to Lleida who is interested in history. When it closed I had fortunately seen all parts up to the gothic period including all the periods that were connected to the Seu. On the way back to the hotel I saw the "new" barock cathedral which seemed too pompous to me and the interesting Sant Joan church which offered the strange riddle that it looked like a (successful) neogothic structure but had several beautiful capitals that looked original. Probably they were recycled them after the destruction of the gothic church.

The next morning the weather was nice and I went up the castle hill again to take photos of the cathedral hill with good light. When I entered the church shortly after 10am the recognized me from the evening before and waved me inside. It was lovely that for a while I was alone in the large cloister. It has very large arches with delicate stone patterns and each has an individual design. It was a fascinating walk around and compare the creative variations. After a while more people joined in and I decided to climb the Lombard style church tower. The common spiral staircase becomes more narrow the further you rise and when a family crossed my way coming down it was quite an undertaking to get past each other. It reminded me of tower stairs in Denmark where they had used a system of traffic lights. That would be a great help here too. After a fast and  easier descent I went into the nave which has long been desecrated and is just a museum. The late romanesque space is quite empty.  Therefore the beautiful arches of the architecture dominate the impression but there are also a few original wall paintings and several nice figurative capitals, the best on this trip beside the cathedral in Tarragona. The fact that it hasn't been used for services for a long time also prevented the romanesque church to be ruined by the often so utterly ugly barock altars that you find in most Spanish churches which gave this visit to this cathedral a certain unique beauty and peace.

After enjoying this space quite thoroughly I went to see the Dipòsit del Pla de l'Aigua in the lower town: A water cistern from the 18th century, a beautiful space of great importance for the provision of the city with water but basically a much smaller copy of the roman cisterns you find for example in Istanbul. Open only on weekends. And since the fast trains to Barcelona run only rarely I finished my day in Lleida with an excellent lunch at a Michelin restaurant.

What about the OUV? Lleida has certainly an important place for politics, religion and art in Catalonia. The sight of the big church with its magnificent tower is quite striking and so is the inside of church and cloister, perhaps to a large degree because it had fallen out of religious use and was not altered over the following centuries. But when you think how many really striking late romanesque and early gothic buildings are not on the list (Rouen, Caen, Salisbury, Wells, Lincoln, Ulm to name just a few) then I do not think this is of global importance. But in any case the cathedral and the city museum and very much worth a day trip from Barcelona.