The Theatre and Aqueducts of the Ancient City of Aspendos

The Theatre and Aqueducts of the Ancient City of Aspendos is part of the Tentative list of Turkey in order to qualify for inclusion in the World Heritage List.

The Theatre and Aqueducts of the Ancient City of Aspendos date from the Hellenistic and Roman Period. Both were reused during Seljuk times, partly by the use of spolia. 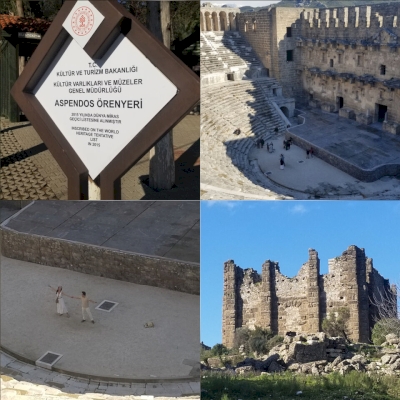 Great theater, lesser great aqueduct. You also get some ruins up the hill behind the theater which are actually easy to miss if the crowd flows into the theater entrance, but you won't miss much out there.

Well preserved, not as good as in France or Italy of course, and nowhere near as impressive decorations. I am not sure how exactly it is trying to keep unique but it's worth a visit for sure.

While I was visiting there was also some filming done as you can see in the pics, which meant having to hide out in the upper tunnels like not having paid for an entrance ticket back in the days? :))

With the theater facing north you will need to pick a good time for taking photos by the way . 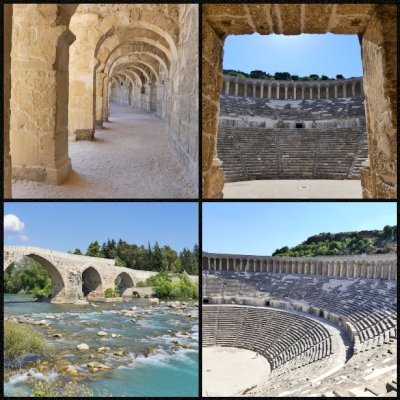 I visited this tWHS in Spring 2021 as a convenient stopover between Konya and Antalya. It is possibly the best theater in Turkey on par with the WHS in Orange, France. On the way there we passed several aqueducts and remains which were not in great shape, except the historical Roman Eurymedon bridge of Aspendos (bottom left photo), some 15 kilometres away from the theatre. A short hike uphill, behind the theatre, which is only worth it to get an exterior rear view of the theatre.

Aspendos was an ancient city in Pamphylia, Asia Minor, located about 40 kilometres east of the modern city of Antalya. It was situated on the Eurymedon River about 16 kilometres inland from the Mediterranean Sea and it shared a border with its neighbor and rival Side. The Aspendos Theatre has been largely preserved and is in very good condition for its age. It has a diameter of 96 metres and provided seating for 12,000 people. It was built in 155 by the Greek architect Zenon, a native of the city. It was periodically repaired by the Seljuks, who used it as a caravanserai, and in the 13th century the stage building was converted into a palace by the Seljuks of Rum.

Aspendos did not play an important role in antiquity as a political force. Its political history during the colonisation period corresponded to the currents of the Pamphylian region. Within this trend, after the colonial period, it remained for a time under Lycian hegemony. In 546 BC it came under Persian domination. The fact that the city continued to mint coins in its own name, however, indicates that it had a great deal of freedom even under the Persians.

In order to keep with Hellenistic traditions, a small part of the theatre was built so that it leaned against the hill where the Citadel or Acropolis stood, while the remainder was built on vaulted arches. The high stage, whose supporting columns are still in place, served to seemingly isolate the audience from the rest of the world. The "scaenae frons" or backdrop, has remained intact. The 8.1 metre sloping reflective wooden ceiling over the stage has been lost over time. Post holes for 58 masts are found in the upper level of the theatre. These masts supported a velarium or awning that could be pulled over the audience to provide shade. There are also remnants of red paint zig-zag decorations on some of the walls.

The theatre is still in use today and the Aspendos International Opera and Ballet Festival offers an annual season of productions in the theatre in the spring and early summer. Due to the COVID-19 pandemic, the spring productions were cancelled so we were lucky that it was empty. Nearby stand the remains of a Roman basilica, an agora, an aqueduct and a nymphaeum. The theatre alone definitely deserves to be inscribed!

I just wonder how they waited so long to put that place on tenative list. It should have been there much, much earlier. Visited a long time ago (July, 1993).

One of best preserved ancient theatres in Turkey, mostly because it was later transferred to a medieval stronghold (similarly to those in Syrian Bosra). There are ancient ruins of a Greek town nearby (much worse preserved). Ideal half-a-day trip if you are based in Alanya.

Renomination of former TWHS Aspendos theater and the Roman aqueduct (1984)

Unesco Website: The Theatre and Aqueducts of the Ancient City of Aspendos

The Theatre and Aqueducts of the Ancient City of Aspendos (T)