Akdamar Church is part of the Tentative list of Turkey in order to qualify for inclusion in the World Heritage List.

Akdamar Church is known for the sculpted decoration of mostly biblical scenes on its external walls. It is a symbol of the medieval Vaspurakan Kingdom which centered around Lake Van. 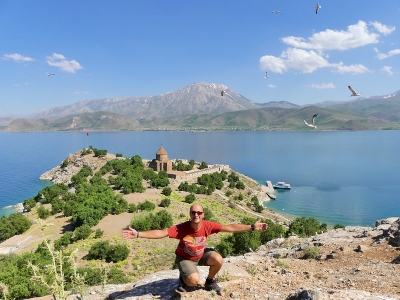 I visited this tentative WHS in Spring 2021. The Akdamar Church of the Holy Cross is situated on Akdamar Island in Lake Van in Eastern Anatolia, reachable by frequent ferries that depart on average every 30 minutes, close to the town of Gevaş, between Tatvan and Van.

The small island is a favourite picnic or BBQ destination among locals and natural haven for birds (mostly gulls, owlets, and birds of prey), tortoises and rabbits, with a natural spring providing ample water. A few stairs just after disembarking the ferry boat lead to the 10th century Armenian Cathedral or Church of the Holy Cross which was the seat of the Armenian Apostolic Catholicosate of Aghtamar from 1116 to 1895. A steep limestone cliff rises 80 metres above the lake's level (1,912 metres above sea level) at the western end of the island. Although there is a fence half-way up the cliff, I noticed that the majority of the locals visiting the island, at some point or another, hiked uphill to enjoy the splendid panoramic viewpoint (photo). I followed some of them after noticing that there was an opening through the fence and the security guards nearby weren't against climbing to enjoy the view but were mostly making sure no drones were flown on the island even though there was no mention of this on a sign or on the entrance ticket.

The architecture of the church is based on a form that had been developed in Armenia several centuries earlier and was built as a palatine church for the kings of Vaspurakan, incorporating a dome with a conical roof. The unique importance of the Akdamar Church (or Ahtamar in Armenian) comes from the extensive array of bas-relief carvings of mostly biblical scenes that adorn its external walls. Upon close inspection, several crosses and writings are visible on the church walls and some visitors were praying around the church and touching most of these engraved crosses as a sort of ritual. Apart from the church there is a very small cemetery behind the church with exquisite tombstones, and the remains of the foundations of monastic buildings. Although the church is still in use for special masses (on average a special Armenian service is celebrated once a year), there isn't much too see inside except for the few unvandalised frescoes especially high up towards the dome of the church. The small belfry outside is a 18-19th century addition. The recent restorations were quite controversial, a recurring theme in Turkey (especially for Armenian sites in Turkey), mostly because of the cross on top of the dome.

The unique nature of the church, being outside Armenia or Georgia and not over-represented in the WH list, would make me think that this site has a very good chance of getting inscribed in the future. Even if it doesn't, it really is a beautiful place to visit if you're in the region. 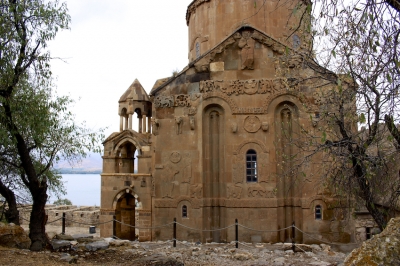 Akdamar (Holy Cross) Church is located on an small island in Lake Van, in eastern Turkey.

The Armenian Church was built between 915 and 921 AD. It is made of volcanic tufa, which give the church a peculiar dark redish color. The most unique and striking feature of this church are the stone bas-relief decoration. They represent a wide range of themes, mostly religious subjects derived from the Old and the New Testament. Adam and Eve, David and Goliath, Daniel with lions, and a funny scene a Jonah thrown overboard into the whale.

To reach the island, you first need get to a small port about an hour west from Van town. There is no schedule : ferries leave when enough passengers have shown up. My travel guidebook said they usually leave when 15 people have arrived. In summer week-ends, local peaople flocks the boats, as the island is considered a great barbecue spot. I arrived in the port early in a rainy Tuesday afternoon in October, and was skeptical about any chance for a ferry departure. However I only had to wait half an hour, and a boat left when 8 passengers on board. The ride is about twenty minutes and costs 15 lira. On the island, another 15 lira entrance free is recquired. The boat waits for an hour (which is enough for a thorough visit, but if not, it is possible to board any later boat).

The interior of the church is decorated with frescoes, which are rare in Armenian church, which walls are usually rather bare.

The church was disused and abandoned during World War I, it was then vandilized and planed to be destroyed in the 50’s and was saved by a local writer. It was heavily restored in 2005-2006 and is now a secular museum. An armenian service is only allowed once a year and controversies surround the restoration (initially without a cross atop the church) or even its name, as it is called Akhtamar in Armenian. A huge turkish flag also flies on one end of the island.

The island itself is very nice to walk around, even if the top of the hill seemed to be banned for visitors (I doubt local people respect that, but I did not try). There are great views of the lake and of mountains of the south shore, and on clear day of the entire shoreline.

I really liked this church in all of its aspect: the bas-reflief on the facades, the frescoes inside, many armenian tombstones scattered around the island, and the magnificient landscape. Worth both a visit and an inscription.