Hiraizumi - Temples, Gardens and Archaeological Sites Representing the Buddhist Pure Land (extension) is part of the Tentative list of Japan in order to qualify for inclusion in the World Heritage List. It is a proposed extension of Hiraizumi WHS.

The central area of Hiraizumi includes the temples, gardens, and archaeological sites representing the Buddhist Pure Land, which are already inscribed on the World Heritage List, as well as the archaeological site of the buildings and their compounds serving as both residence and government office that was the backbone of the political and administrative power in the region. In the surrounding area there are also archaeological sites such as the manor that formed the wealth of Hiraizumi as the Pure Land, the workshops that were run with those wealth, and other sites. 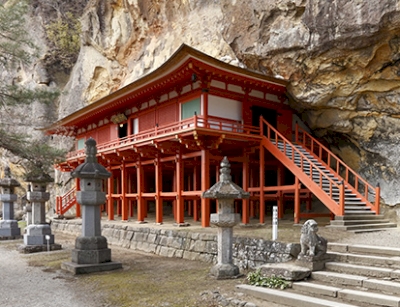 In my opinion Hiraizumi is rather boring. Even for someone like me who loves nature, the gardens and temples are very average and a big plain with a lake in the middle doesn't make me thing "oh wow, a world heritage site, it must be good!" or anything on that line.

I arrived with a very early train before any of the WH sites are open and thus I took a taxi to the popular Takkoku-no-Iwaya Buddhist temple just outside of town. I remember it opens at 6:30am or something. Getting here without a taxi seemed not possible at this hour. Later on when I saw the rest of Hiraizumi I was shocked that Takkoku-no-Iwaya was the best of all and it's not inscribed. In the end I think it all comes down to some administration work and this extention will take care of it and make the overall Hiraizumi site better. I later found out that the temple was rebuilt in the 60s and nobody knew the original design so that is usually a problem as the sites should be authentic but it didn't take any pleasure away from my visit.