he Ôshû Fujiwara family turned Hiraizumi into the political and administrative centre of the northern realm of Japan at the early 12th century. The rulers set about constructing a country based on Buddhism, of which Hiraizumi was the main city. Its layout is seen as reflecting the cosmology of Pure Land Buddhism.

I started my visit to Hiraizumi with a smile on my face after the friendly welcome at Hiraizumi railway station: the seats are heated at the public toilets, there are coin lockers to get rid of any unnecessary luggage and there is a tourist information which hands out all kinds of folders and maps in English. I needed it after having been on a crowded train from Tokyo sandwiched between a fat older man and a sleeping salaryman.

And then I headed off into town – a very prosperous-looking town that is, just as Frederik noticed below. It’s about 10 minutes walk to the first of the 5 inscribed locations: Motsuji Temple. This is mainly known for its garden, a large landscape garden centered around a lake. I was blessed by great weather, which added to the fine composition. I also loved the building with the thatched roof at Motsu-ji. I had read in the AB evaluation that “visual links between sites are compromised”. It sounded like overreacting to me to lament about electricity poles, but I was annoyed also when one of those kept showing up at my photos of Kanjizaiô-in Ato. This is a smaller pond, close to Motsu temple. After visiting the world heritage center, which has some interesting displays, I climbed up to Mount Kinkei. This “sacred mountain” fortunately isn’t even 100m high. There’s not a lot to see, which is also the case at Muryôkô-in Ato: an archeological field on the other side of the railway tracks. After having visited 4 out of the 5 inscribed parts, I took a taxi to bring me to Ryokan Shizukatei for the night. This fine traditional Japanese hotel lies some 8 kms out of town, amidst the rice fields. I received a heartily welcome, and was pampered from that moment on with great food and a Japanese bath.

The next morning, the ryokan owner dropped me at Chuson-ji. This is the main temple complex, and I thought I had saved the best for last. It consists of many wooden temples and other buildings. The thing to see here is the Golden Hall. This unfortunately is encased in a protective building. After paying the 800 Yen (8 EUR) entrance fee, I felt that I entered a museum. It is also not allowed to take photos of it. It’s a brilliant piece of work however, imagine how it would be if it still stood outside among the trees and the other temples. In general though, Chuson-ji did not live up to my expectations and I rate Motsu-ji with its great garden as the best sight in Hiraizumi. 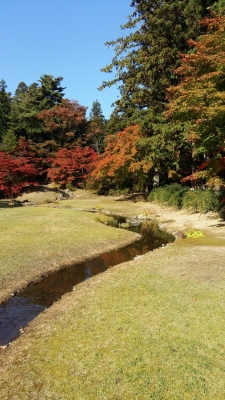