Bavay-Tongeren is a section of a Roman road which linked two strategic points, the North Sea from Boulogne to the Rhine in Cologne. It is a relict cultural landscape from the Gallo-Roman period, where it was used for the movement of troops, administration and commerce. The full road also passed through France, the Netherlands and Germany. 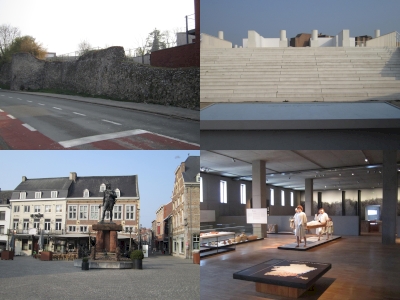 From the 16 TWHS in Belgium I had only 1 left to visit. The name of that TWHS is: Le tronçon Bavay-Tongres de la chaussée romaine Boulogne-Cologne situe sur le territoire de la Région wallonne. With the translator I understood it a little bit more:  The Bavay-Tongeren section of the Boulogne-Cologne Roman road lies on the territory of the Walloon Region.

OK it is a part of a road between Bavay and Tongeren. I know there are more Tentative sites where I asked myself: How can I visit this site and what is there to see ?   And this is also a strange site. After reading more about the road I saw that the road still exist. It is de N69 (high)way (Chaussée Romaine).

It seems the best to concentrate me on Tongeren, the oldest town of Belgium. Maybe there was something left of the old road ? And yes it was, but not so much. So I decided to visit Tongeren and not only some stones or a part of the N69.  There is more in Tongeren (Belfries and one of the Flemish Béguinages) and I tried to make my visit so good as posible. Like almost always I parked my car on a parking of a supermarket and from there I walked to the Cesarlaan. And indeed there are remains of the old road or is it the old wall or both ? Nevertheless I did what I could.

After 50 meters walking on the Cesarlaan I saw a stair and went up. It is the way to visit a Roman Temple which is almost hidden in Tongeren, but it is also part of the milestone route through Tongeren. They rebuilt the temple (ruins) and it is unbelievable such a temple in that place, a very quiet part of Tongeren.

Slowly I walked to the center of Tongeren in only 10 minuts. I walked along the statue of Ambiorix, along the Belfries to the Gallo – Roman Museum. I was surprised of the size of the museum and the modern building. I bought only a ticket for the Roman exhibition, and I needed almost 1.5 hour to see the 3 floors from the permanent exhibition. It is so much to read all from 500.000 years ago till the end of the Roman time in Tongeren and surroundings. It is really a beautiful and interesting collection what they have in the museum.

After the museum visit I walked through the Flemish Béguinages to the Moerenpoort (citygate). The daytrip to Tongeren was worth it. There is so much more to see then some stones from the old Roman Road !

On my way back home I stopped at the The Netherlands American Cemetery and Memorial in Margraten. From the website of Magraten: The cementery is lying near the famous Cologne-Boulogne highway built by the Romans and used by Caesar during his campaign in that area. 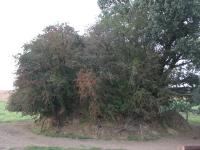 I put quite a lot effort in finding out which is the best place to visit this section of the roman road. According to the tentative list database description, the only monuments visible along it are the tumuli and I found out that they are located mainly in the Hesbaye territory and in the end I chose to visit two of them called Sun Tombs of Ambresin and the one of Moxhe.

However when we arrived at Ambresin we noticed that the roman road practically doesn't exist anymore and that instead of it there is just a network of modern paths and asphalt roads that are individually often called "Roman Road" passing exactly where once it was located on all its extension; in addition to this I had made a mistake in the identification of the precise position of the Sun Tombs so we didn't find them where I expected them to be but just tried to find them driving along the Roman Road eastwards. In this manner we arrived accidentally to the tumulus of Moxhe before and without having found them. It was located exactly where I had though (200 metres eastwards from the crossroad of N69, that is called the Roman Road, and the N80) but how disappointing! Just a small fenced mound surrounded by grazing cows and covered by trees of which you couldn't ever say it was a tumulus without being aware of it before. Obviously that was enough for us!!!

This is a typical TL site with no chance to get inscribed on the list: it seems that the entire roman road is in these conditions and I would certainly say that it has no authenticity and is of very limited importance. Actually there are not roman roads on the WHL and this is probably a big gap. However it is not easy to find one that is well preserved and I think that the only one that can be inscribed on the list because it has a long section in good conditions with important monuments along it is the Via Appia to the south of Rome. In alternative it would be possible to candidate the most important preserved sections of roman roads in a transboundary serial site as is being done for the Frontiers of the Roman Empire for the same civilization or similarly to the planned WH candidature of the Main Andean Road regarding a different civilization but the same type of site (road network).