Napier Art Deco historic precinct in the city of Napier on the North Island is one of the best preserved Art Deco districts in the world, and provides a unique Southern Hemisphere version of the style. Napier was devastated by an earthquake in 1931, and the central business district was rebuilt in the Art Deco style over the next decade. The one and two story buildings were decorated with ornamentation prevalent in Art Deco design, such as sunbursts and ziggurats, while also incorporating Maori designs. 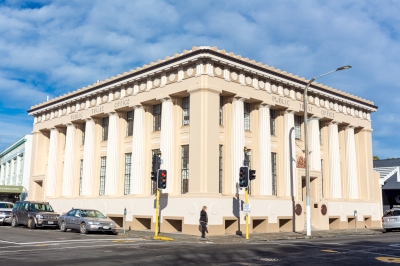 The lifting of restrictions following months of lockdown allowed me to visit some of the inscribed or tentative sites this winter break. My first thought was to visit the different components that make up the Auckland Volcanic Field, but Napier proved to be attractive enough. Date of Visit: July 2020

Description: The UNESCO WHS page of this tentative site indicates that the cityscape is the local government's response to the catastrophic 1931 earthquake that leveled most of the city. Art deco was adopted as the city's architectural style (given the time period), but I would say it is toned-down, with most buildings constructed using reinforced concrete and possessing only one or two storeys. This is not surprising, however, as they want to prevent the same level of damages they experienced in the 1931 earthquake. The Napier City Council bills the city as the world's art deco capital.

Given the above assessments, the city could not be endorsed for inscription in the UNESCO WHS list. Indeed, I thought that the city is too modest to merit an inscription. But while Napier does not have international significance based on this assessment, I still think that it still an important historical and architectural site in New Zealand. It's a popular tourist site in the country anyway.

All information regarding the site was retrieved from the UNESCO WHS website and Lochhead (2011). Art Deco Napier. DOC.