Historic Center of the City of Trujillo is part of the Tentative list of Peru in order to qualify for inclusion in the World Heritage List.

Trujillo is an historic colonial city whose urban design reflects the urban planning practices in South America and the desire to establish its own architectural and artistic style. The main monuments include the cathedral, colonial mansions, historic houses, religious and civil buildings and the city walls. Most of these monuments, brightly coloured and decorated with characteristic wrought iron, line the Plaza de Armas and the important arteries of the historic centre.

Map of City of Trujillo

Trujillo is one of the first Spanish settlements in Peru though the area had been settled for thousands of years previously. The WHS Chan Chan and even more impressive Moche ruins of Huaca del Sol y Luna are just outside of town and we stayed overnight in Trujillo to visit them.

The center of Trujillo is quite small, maintaining its colonial grid layout and completely encircled by the busy avenida España. It felt and looked much safer and cleaner than the rest of town which still suffers from the typical garbage, crime and traffic problems common to Peru. The centre has a large and busy Plaza de Armas on which you'll find typical 2-storey colonial buildings, many with iron grillwork or wooden balconies (also seen in Lima's historic centre). Along with the cathedral, everything looks relatively recently painted and restored. 5 blocks of Jiron Francisco Pizarro street between Plaza de Armas and Plazuela El Recreo are pedestrianized and if time is limited a walk along this section is sufficient to get the idea.

Like Els, I don't expect this to make the List. It didn't have any unique outstanding features but it does make a visit to the city nicer than it otherwise could have been. 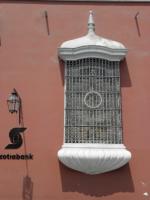 The background of this nomination is a bit of a mystery to me, as the short introduction on the Unesco-website is an unintelligible paragraph that seems to have been generated by Google Translate from Spanish into English. Something about "a lot of real landmarks".

I guess chances for any Spanish-colonial historical center to get into the List nowadays are not great, but Trujillo's architecture definitely has a special touch. Most remarkable is the wrought-iron grillwork that adorns the historic mansions in the city center. These buildings all have been turned into practical use, especially banks seem to favour these as their location for business. When I visited on a Friday morning, the Plaza de Armas was taken over by a parade of marching children representing different schools. A militarist display likes this is something you would rarely see outside of South America. It would have been unheard of at my school in the Netherlands at least: we did not do much outside of the curriculum except for the yearly Easter football tournament. But it looked totally appropriate to Trujillo.

I would not make the trek out to the north of Peru just to see this though - about 2 hours is enough here, the historical center is not big. But you will have to get here anyway if you plan to visit the nearby WHS of Chan Chan and the Moche Ruins.

Unesco Website: Historic Center of the City of Trujillo

Historic Center of the City of Trujillo (T)