The Dunejec River Gorge in the Pieniny Mountains

The Dunejec River Gorge in the Pieniny Mountains is part of the Tentative list of Poland in order to qualify for inclusion in the World Heritage List.

The Dunejec River Gorge is dividing the Pieniny mountains into the Polish and Slovakian part. The National Park is characterized by interesting geological and geomorphological structures with very little anthropogenic influence. The limestone rocks which were not glaciated offer an unique flora and fauna and spectacular landscapes. The most outstanding rock-massive are the summits of Trzy Korony.

Map of The Dunejec River Gorge in the Pieniny Mountains 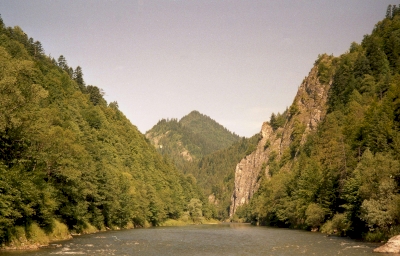 This is a small national park in Spiš region on the border of Slovakia with Poland. It comprises 8 km long valley of river Dunajec between Červený Kláštor (medieval monastery there) and Lesnica villages, and small area of hills covered by forests and pastures on the Slovak side. This is very touristy place and almost a tourist trap. The main attraction is to go from Červený Kláštor to Lesnica by traditional boats called pltě, and we could see the hordes of tourist attracted by this activity. The same attraction is organized also on the Polish side that seemed to me even more touristy than the Slovakian one. I visited Pieniny in 2004, just after entering of both countries to EU, but I heart long stories about absurdly strict Polish border police that loved to capture and almost imprison any random intruder from Slovakian side. It is also possible to use your own boat or raft, but it is quite adrenaline adventure.

Instead of boating we preferred simple walking through the valley with slopes covered by dense forest and occasional limestone rocks (PHOTO). The most famous rock formation is Trzy Korony (Three Crowns) on the Polish territory, but it is slightly aside of the river. While quite interesting, I think that Pieniny is a site only of national or better said bilateral importance. After entering Lesnica village, we escaped from the crowds of tourist by marked green trail in direction to Haligovce village, and we admired the picturesque landscape all around.

I also visited the nearby valley of river Poprad, also on the Slovak/Polish borders between Malý Lipník or Sulín and Mníšok nad Popradom. This area is not protected and it is not such spectacular as Pieniny is. I enjoyed Poprad valley more, because it is more relaxed and quiet. 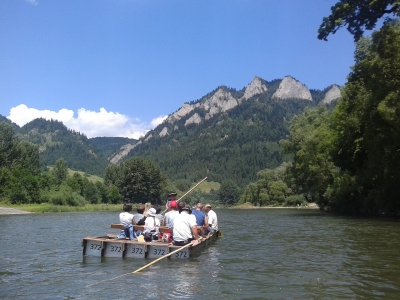 As any regular tourist the best way for me to see the river gorge is to queue up for the very popular raft tickets. It will take you through the gorge for about half an hour. On the way you can see beautiful rock formations. The guides don't really speak any English. Some rafts also come from Slovakian side every since they both are part of the EU. You can park your car at the end station of the ride and take a minivan to the ticket booth. There are also two lengths of the ride but the long one is not often available because the best part is actually just after getting on the raft. Keep this in mind for parking the car.

There is also path along the gorge which is popular with bikers and hikers. It will take you a few hours but should be as enjoyable as the ride.

Unesco Website: The Dunejec River Gorge in the Pieniny Mountains

The Dunejec River Gorge in the Pieniny Mountains (T)