System of Fortifications at the Confluence of the Rivers Danube and Váh in Komárno - Komárom (Slova) is part of the Tentative list of Slovakia in order to qualify for inclusion in the World Heritage List.

Komarom (Hungary) and Komarno (Slovakia) face each other on the opposite banks of the Danube at an important crossing point since Roman times. Komarno consists of an old and a new fortress, and the Palatine and Vah fortification lines from the 19th century.

Map of Fortifications at Komárno 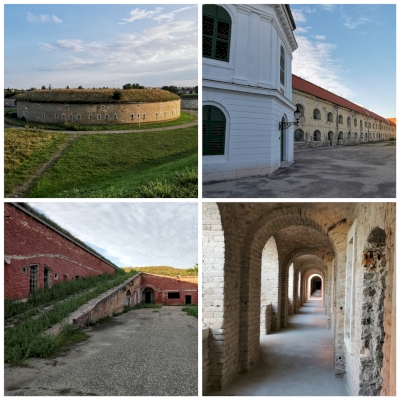 I just read the ICOMOS review that denounced Komarno/Komarom quite severely. The authenticity of the fortifications has been partly lost, the integrity is damaged by a railway line and industrial zones, the comparative study was carried out inadequately and the current conservation is "patchy". Even the risk of earthquakes was mentioned, and the Management Plan was deemed "excessively" ambitious. So a clear Rejection.

Last May Komarno was my first overnight stop in Slovakia. Its city center is pleasant enough though quite small. The Danube divides Slovak Komarno from Hungarian Komarom since 1920. This is not a romantic Danube: Komarno is a main transport hub. The fortifications are located on the converge of the Danube and Váh rivers. They are hidden from sight behind large walls, and I couldn't find a way to get in. The immense fort withstood sieges during a 300 year period, keeping the Turks out of the Hungarian empire. I have seen impressive photos of the fort's layout taken from the air, and also thought its Siege history might get it in. But unfortunately for the Slovaks and Hungarians it wasn't enough.

Unesco Website: System of Fortifications at the Confluence of the Rivers Danube and Váh in Komárno - Komárom (Slova)