The Renaissance Houses at Slavonice comprise a set of burgher houses in the historic center. The houses are richly decorated, notable for their gable shaping and a number of them are covered in sgrafitto. The town had its heydays from the 16th to the 18th century. 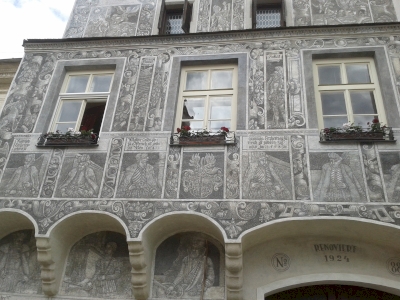 Slavonice has small and very compact historical core of prolonged shape with the block of houses around the church in the middle. This round structure divides the town into two squares: the larger one is somehow simillar to that of Telč, but it is much smaller than in Telč. The smaller square is maybe the most impresive part, because many houses have a vast sgraffito decoration on their facade dating back to 16th century (PHOTO). The sgraffito is not only ornamental as can be seen in many towns of central Europe, but also figural inspired by Biblical stories in line with protestant atmosphere in Slavonice of 16th century. Therefore, the main quality of Slavonice can be found in its houses, which are maybe finer those in Telč. The title of the nomination calls them as renaissance, but I would prefer late gothic influenced by Italian renaissance. Furthermore, the houses have not only preserved their facades but also the interiors are very nice and of high quality with fine late gothic detaills (vaullting) and frescoes from 16th century.