Empúries was an ancient city on the Mediterranean coast in northeastern Spain. The city was founded in the early 6th century BCE by Greek merchants from Phocaea (Ionia). Empúries was occupied by the Romans at the end of the 3rd century BCE and was the starting point for the Roman conquest of the Iberian Peninsula. The archaeological site includes the sector of the Greek city and remains of the Roman municipal city. 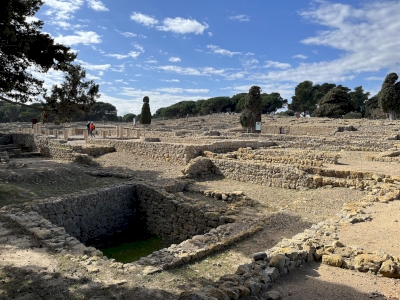 Empuries is about one hour by bus from Gerona. I found only one connection that made sense which left Gerona around 9am and returned from L'Escala around 2pm which gives you plenty of time to visit the ruins. From the bus stop Empuries it is about a twenty minute walk to the site and it is worth walking the small detour along the beach since Empuries is located on a lovely bay with beaches everywhere. In February swimming was no temptation for me but I enjoyed it nonetheless.

The access to the archeological site is via a very modern looking Libeskind like visitor center. The entrance fee was very modest with 6 Euros and the excellent audio guide is included. There are lockers, toilets and vending machines. From there you walk over to the first area: the Greek town. This is impressive in so far as it is very extended and the foundation walls are clear everywhere. With the audioguide to get a feeling for the function or different areas as markets, temples, private houses etc. Best preserved are the subterranean structures like cisterns and reservoirs. It adds hugely to the experience almost to the point of being distracting that you have always the deep blue sea and the beautiful bay around you. So it is a little like Pompei as you can walk the streets and get an idea how people lived here. But other then in Pompei there is really very little left that is higher then two feet and there is almost no ornamentation or art left. The few mosaics they have were covered for the season. There is also a museum in a monastery like looking building complex but it was closed for renovation and only two rooms showed some of the highlights. The best exhibit is the statue of Asclepius from the local temple.

After this you go uphill and visit the Roman city. The Romans traded with the Greek port and over time builded a second city beside the Greek city with huge public buildings and squares and city walls. Of those only a small part is excavated yet: a huge forum, baths, two huge private villas. But as in the greek part there is not very much left beyond the foundations so it cannot compare it better preserved roman sites.
One kilometer north is the small town of Sant Marti d'Empuries which was at the time of the ancient Greeks an island and it was here where they settled first using the natural harbor to trade with the Iberians and the Punics. Only later they build one kilometer south the "Neapolis" what is now the ruins of Empuries. I would have like to see that probably charming village but in the end it seemed to little time to walk there and then all they way back to the bus stop in time.

The main importance on Empuries, also in regard to its possible inscription, seems to be that this was the door to the Iberian peninsula first for the Greeks (coming from Asia Minor btw, not the Greek mainland) and then for the Romans. Already in Tarragona you wonder if it is really inscribed for what is left or rather for is lost glory and I got a similar impression here: I is an interesting visit, very enjoyable for the history, the location and the good audio guide, but there is not enough left that it would add much to the list. 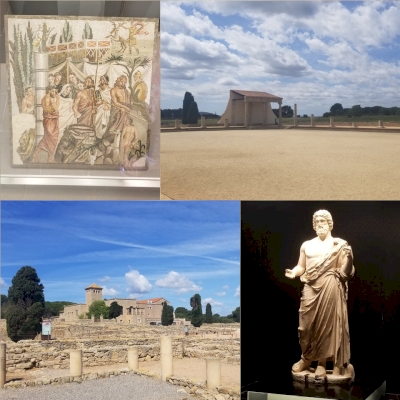