Romanesque Cathedrals in Puglia has been part of the Tentative list of Italy.

The Romanesque Cathedrals in Puglia is a series of six cathedrals in the Puglia region that demonstrate how the region was a laboratory of an artistic style combining Eastern and Western suggestions, Romanesque stylistic elements with Byzantine and Arab inflections. The ancient basilica plan was often blended with elements of Eastern origin, resulting in a distribution of volumes only to be found in Puglia. The decoration of cornices, portals, windows and rose windows further distinguishes Puglia's Romanesque architecture.

Map of Romanesque Cathedrals in Puglia 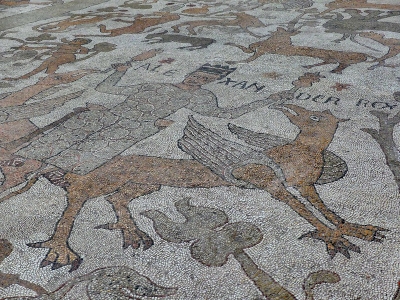 I visited this tWHS in June 2014 and November 2019. After having visited the worthwhile locations near Bari in June 2014, I wasn't convinced that much. The Cathedral in Modena, just to mention a similar site in Italy that was already on the list, already covered Romanesque quite well even though the Cathedral in Bitonto is quite remarkable for its age. So as a half day trip from Lecce, in November 2019 I decided to visit the last remaining location of Otranto to visit its Romanesque cathedral.

Otranto itself is a pretty town with river streams and countryside on one side and a fortified waterfront on the other. The cathedral exterior is pretty normal and I was also happy that there was no entrance fee to visit inside. Perhaps this is also one of the reasons why such a beauty is not that famous yet. The whole cathedral floor is completely covered with beautiful 12th century mosaics! The mosaics are in very good condition considering that the cathedral is pretty much still in use and there's no protection for the mosaic floor like there is in Aquileia for example.

The floor mosaics include episodes from the Old Testament such as the story of Adam and Eve, zodiac images, the tree of life, the tortures of hell, the tower of Babel and last but certainly not least Alexander's flight to the heaven carried by two griffins with the title 'Alexander Rex' (photo). According to a medieval legend, Alexander, wishing to see the whole world, first descended into the depths of the ocean in a sort of diving bell, then wanting to see the view from above, he harnessed two griffins with a seat for him between them and enticed them to keep flying higher by placing meat on two skewers which he held above their heads. The mosaics in Otranto's cathedral are indeed very fine. Alone, they were worth the visit from Lecce, and I think they deserve to be included in the WH list at least as much as Aquileia's mosaics.

I visited 4 cathedrals from 6 in total: (1) S Nicola di Bari (extremely impresive exterior&interior with the tomb of St. Nicholas), (2) Cattedrale di Bari (massive buildings with large number of fine romanesque details), (3) Cattedrale di Bitonto (I would say the typical example of romanesque Apulian Church, though the refined version of S Nicholas, with rich decoration and excavated fine floor of its predecessor with famous mosaic of Bitonto Grifone), (4) San Corrado in Molfetta (old cathedral - there is alse a new one in the town; it is quite small, maybe not such impresive but it has byzantine structure with three domes in the main nave). What I know from the literature the quality of Catttedrale di Ottranto can be found in the unique mosaic floor, and Cattedrale di Troia has decoration inspired by Tuscany style such as Pisa and it is famous for the rosetta window in the west facade.

IMHO I would include also Cattedrale di Trani to the list - I strongly recommend to visit Trani and spend there a couple of days if you are in the area, it is really amazing place. In this case, the cathedral has been altered in gothic period so it is not pure Romanesque. However, most of the proposed churches such as Bitonto (and even S Nicola) is the result of extensive restoration to mediaval appearance...

In conclusion, I think that this ensamble deserves to be included to the list, because of its quality and merging together styles from other parts of Italy (Pisa), Europe (Normandy, France), and Byzantine culture. 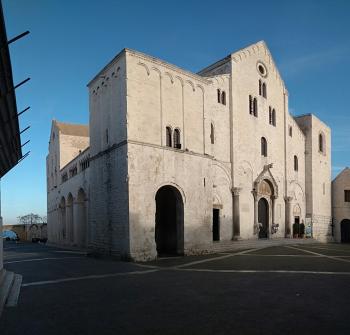 When visiting Puglia, I ended up staying in Bari for two nights. Bari has a small old town, nice, but not spectacular compared to the sites of the area.

Two churches in Bari are part of the tentative site "Romanesque Cathedrals in Puglia". The churches in Bari also came recommend by a colleague, so I went and visited. Specifically, the Basilica di San Nicola left an impression: It's a blend of a church with a castle and the dimensions seem very off. My picture bears a bit witness for this as I had to use panorama mode to capture the full site.

All proposed sites (as taken from the nomination file) are:

These churches sure are nice and if you pass through Bari go and visit. But I am not convinced that they should be inscribed. Norman architecture is covered by the site in Sicily. And documenting each local flavor of a given style cannot be the point of world heritage sites. And my usual complaint: I don't like serial nominations all that much.

Bari is well connected with all of Italy and the local transport hub for Puglia. You will probably pass through when visiting Puglia and the nearby WHS: Alberobello, Matera, and Castel del Monte. All WHS can be done on a day trip from Bari. In addition, you can travel to Monte Sant'Angelo, part of the Longobard places of power.

There are two other TWHS in the area: Lecce (strong recommendation to go and visit) and the Karstic Caves of Puglia.