Karstic caves in prehistoric Apulia is part of the Tentative list of Italy in order to qualify for inclusion in the World Heritage List.

The Karstic Caves in Prehistoric Apulia are three caves that are important from an archaeological viewpoint. Both Grotta Romanelli (Castro) and Grotta delle Veneri at Parabita were inhabited during the Palaeolithic Age. In Grotta Romanelli bone tools and limestone stones with naturalistic engravings or geometric shapes have been found, while two small-sized female figurines carved in bone from the Upper Paleolithic have been found in the Grotta della Veneri. The Grotta dei Cervi contains the largest as well as the most important set of paintings from the European Neolithic period. 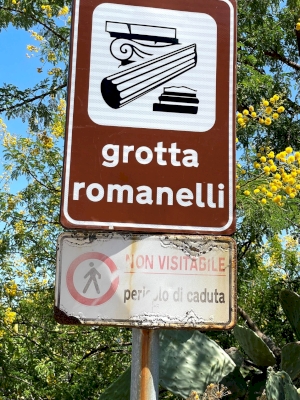 Our long summer holiday 2021 included a drive down to "the bottom" Italy, and amongst other sites we wanted to visit the three Karstic caves in Apulia, but we didn’t have any luck.

Our first attempt was Grotta dei Cervi which is by the coast 10-12km south of Otranto.
While trying to locate the site by the coordinates we drove back and forth a couple of times and finally ended up at a closed gate by the main road. We had visual of a small building which might be the cave entrance, but we’re not sure. After searching a bit on the internet we found out that this site is only open to authorized personnel and researchers only.

The second one was Grotta Romanelli and it is further down the coast another 10-15 km.
We located the road sign (where there is almost impossible to halt) and the sign lower on the same pole said “non visitabile - pericola di caduta“ (danger of falling). Also this time information found on the internet told us the cave seems sealed off and unvisitable. It may be accessible from the sea, but we didn’t try that.

Discouraged we looked up information about the third cave, Grotta delle Veneri, which is about 40 km inland straight west.
The internet says that this isn't accessible either, but it’s possible to peak in through some bars during a hike. A distant peak into one of the three caves doesn’t make us very happy so we dropped out of the quest. We will leave this as a “no visit”.

We're kind of curious on how the five member of our community having ticked this of have visited this site?