Original Meadow - Pasture Sites of Slovakia is part of the Tentative list of Slovakia in order to qualify for inclusion in the World Heritage List. 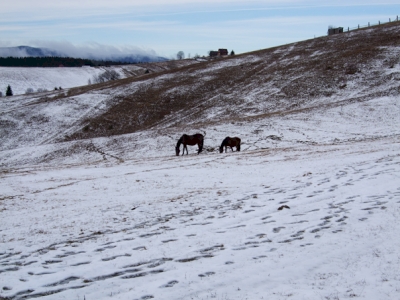 This is another strange tentative site of Slovakia with no chance to be inscribed. The nomination text is very confusing and three parts of traditional economy based on agriculture and natural resources are mentioned there: (i) grassland culture with meadows, (ii) vinicultural landscape with vineyards, and (iii) mining landscapes for production of silver, gold and the opal precious stone. Seemingly, only one part is the target of this nomination - the original meadows of Slovakia. The part of vineyards is nominated separately as Slovak Tokai region, and one mining landscape of Slovakia has been already inscribed as Banská Štiavnica WHS.

As concerns the original pastures, it includes quite large area of traditional countryside landscape of Slovakia – in total 9 components located in various mountainous regions of Slovak Carpathians. I visited at least 5 regions of the nomination many times – (i) Horehronie region around Helpa and Telgart villages, (ii) Turiec region around Blatnica village, (iii) Orava region around Zuberec, Zazriva and Terchova villages, (iv) Podpolianie region around extinct Poliana stratovolcano protected landscape, and (v) Zamagurie region located to the East from Tatra Mountains close to the border with Poland.

But I visited the countryside not far to the rest of nominated sites during my trips to Slovakia. The reason of my visits was never the villages surrounded by the pastures in the valleys but always the mountains above them. Thus, I have almost no representative photo of this TWHS in my archives…

PHOTO – it is from the region around Poliana, some 10 kilometers from Strelníky village mentioned in the nomination. I spent in the region of Poliana and Vepor one week around New Year Eve 2010, sleeping in the nature in a tent. It was very relaxing, because of vast areas of mountains and forests all around. We could spot a lot of traces of forest animals in the snow such as of deer, lynx, wolf, and bear, etc. but that of humans only very occasionally.

Even though all the pastures and villages with wooden dwellings are picturesque and nice to explore, I cannot say that they are exceptional. Further, they have no OUV in my opinion, and esthetical qualities do not justify that. There are many similar areas in the broad Carpathian and Alpine region. I also do not understand, why this TWHS is nominated as natural site, it should be rather a cultural landscape.

Unfortunately, all the sites are heavily affected by destructive impact of 40 years of communism and turbulences after the Velvet revolution. So, I think that their vitality and quality are questionable.