Their design and construction, consisting of a timber framework filled up with clay and thatched with sheaves of leaves, is rare nowadays. All designated sites are shrines, but there have been many other buildings in the past in the same architectural style. They have been best preserved in the villages, away from modern construction and warfare.

The WHS consists of a number of buildings (10, 12 or 13?) around Kumasi in central Ghana. Kumasi was once the capital of the great Ashanti Empire. The buildings consist of four rooms around a quadrangular courtyard. Three of the rooms (those for drumming, singing and cooking) are open, while the fourth (the actual shrine) is closed to all but the priest and his assistants. The inner courtyards are usually littered with fetishes. The shrine is home to Obosomfie, the spiritual abode of a deity, who manifests itself through a fetish priest. Some of the enlisted buildings still have priests, some don't.

During my stay in Kumasi, I hired a driver for the day and we went on a tour across the surrounding countryside. There are a couple of interesting craft villages to visit. There you can see Kente-weaving (in Adanwomase) or the dyeing of Adinkra-cloth (in Ntonso). To satisfy one of my WHS-goals of this trip, we also included the Besease shrine. It is located near Ejisu, 20 km east of Kumasi. The whole compound is quite small, so it is kind of an underwhelming experience. You’ll have to try hard to spend more than 10 minutes inside. Don’t overlook the fetishes that lie around in the courtyard: there’s a tortoise for example, and strings of sheep and goats’ vertebrae (from sacrificed animals). Women who can’t get pregnant are said to still visit the shrine. The shrines obviously are part of a living tradition that now almost has gone. However, they have been included in the World Heritage List for their vernacular architecture. A wonderful feature are the symbols carved into the clay of the interior walls. 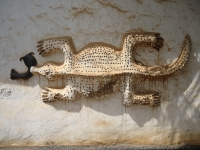 Great set of photos of a number of the shrines

Unusual Entry Requirements or Restrictions: "Women are not allowed inside the shrine during their menstrual period" - from a study paper on the Beasase Shrine