Les tombes de la Basse Selca is part of the Tentative list of Albania in order to qualify for inclusion in the World Heritage List.

The tombs of Basse Selca are remains of an Illyrian city that was a regional administrative and trade center. Five rock-cut, monumental royal tombs from the 4th-3rd century BC have been discovered. The graves held rich findings including weapons, bronze vessels, ceramics and gold jewellery. 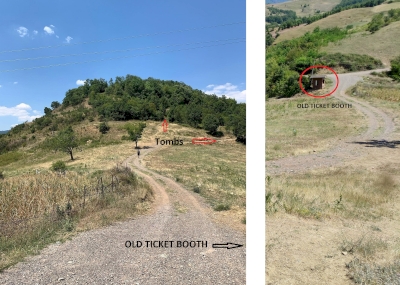 There is not much that can be added to Solivagant's excellent review of les tombes de la Basse Selca in Albania. I will only give an update on how to get there and what to expect as of August 2022 when I visited the tombs on my way from Elbasan to Lin.

A car is needed to get there. The tombs are in the middle of nowhere and there is no public transportation that could take you near enough.

I left the main road (E852/SH3) in Qukës and turned towards Karkavec. This road is either beeing built or being completely renovated. It is not paved and some parts, especially the beginning near Qukës, are in pretty bad conditions. The GPS told me that it would take 1 hour to reach the tombs from Qukës, however as I drove ahead, the road improved and it wasn't that bad after all.

After about 10 km and a steep uphill slope, you'll find a small country road on the left that looks pretty bad. This road, which leads to a group of houses called Lagja e Kumellarëve, is indeed very bad and completely unpaved, however, it can be done even with a small car if driven carefully.

My advice is to drive up to Lagja e Kumellarëve (about 3 km from the beginning of the country road), find a place to leave your car and walk for the last few hundreds meters. It is also a nice walk and you'll see some modern, but old, graves with colorful plastic flowers near the road.

Eventually you'll reach an abandoned shack that looks like it was supposed to be a ticket booth and a trail that goes up a hill on your right hand side. There used to be a sign as well but it so damaged that it can be read now.

The tombs are found just by following the trail, some of them are at the top and others (the most decorated) are found by following the other path that starts about halfway to the top, on the right side (see arrows in the picture). The two paths make a sort of a loop so either path you follow you should be able to see all the tombs.

Unfortunately, the place must be used as a picnic spot by locals as it was full of trash and empty bottles and the tombs seemed to have seen better days. It feels like they have been forgotten after their initial discovery.

Overall, the detour and the visit took about one and a half hour. Much better than what the GPS told me.

In my opinion, the tombs do not have that OUV and the care needed to became a WHS, however, the adventure to get there, the atmosphere of the place and being completely alone (with my wife, actually) immersed in nature and history was absolutely worth the effort and the time. 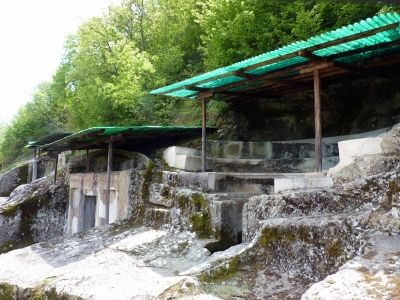 We visited “Les Tombes de la Basse Selca” in April 2018 following our decision to try to “fill in” all of Albania’s current T List, as well as its inscribed, sites. You will find it more normally titled “Royal Tombs of Selca e Poshtme”. It consists of a series of rock-cut tombs situated on a rocky “acropolis” in empty country behind Pogradec which date to c4th -3rd Century BC and belonged to the Illyrian royalty.

No, we didn’t know much about the Illyrians either and our “knowledge” of “Illyria” was limited to its occasional use as regional name across many historical periods in various areas of the Western Balkans!  Wiki gives a quick overview. It is worth noting that the period of the tombs is contemporaneous with that of Philip II and Alexander the Great of Macedonia - Indeed in 358BC Philip II defeated the king of Illyria. A few searches will also identify that the ability to claim ancestry from the “Illyrians” is important to many “Albanians” and, to this day, plays a part in the relationships between Albania, Macedonia/FYROM, Serbia, Kosovo and Greece. The history and territory of these early Balkan tribes is not a “dead” issue! Have a read of  “Who are the Illyrians? The Use and Abuse of Archaeology in the Construction of National and Trans-National Identities in the Southwestern Balkans” by Maja Gori if you want to know more!

Our trip there in our little rentacar was “problematic” mainly because the road from Karkavec was undergoing a major reconstruction and we often found ourselves travelling along deep muddy ruts left by enormous bulldozers (and indeed following close behind them!). The road is likely to be finished soon but you will need to leave it at 41.010073, 20.514968 and follow a very minor road through tiny villages. The only people we saw were the old and infirm - 1 lady driving her (single) cow whilst her even older husband followed behind sitting on a donkey! This is remote and underdeveloped “Europe”. Stop at 40.989797, 20.522028 and you will see a rusting yellow sign with an arrow and the words “Varret Monumentale - Selcë Posht”. A footpath leads to a rocky summit around 300m away.

There were some indications that, many years ago, this might have been a site with regular visitors - but the stone and concrete steps were now partly covered or collapsing. Apparently it was excavated from 1969-72 by an archaeologist (Neritan Seka) who, in 1990, was a founding member of the “Democratic Party of Albania” - the first opposition party after their legalisation towards the end of the Communist era.  In 1997 he even served for 1 year as Minister of Internal Affairs (albeit for a different party!). The year in which excavations started may be significant - An 18 page monograph available on the Web titled “Archaeology in Albania 1973-83” contains this -  “The First Conference concerned with the Illyrians and the origin of the Albanians took place in Tirana in 1969”. And this - “from the outset (archaeology) has received strong support from the Party of Labour (Communist party) under the leadership of Enver Hoxha”!! And this book - “The Practice of Archaeology under Dictatorship” also provides an insight into the way in which archaeology and “Illyria” were viewed in Albania at that time.

Clearly, sites like Selcë e Poshtme played their part in supporting the view of “Albania” - past, present and future, promulgated by the Communist government. A uniquely "Albanian" and self-sufficient "communism". Even in these remote hills, politics couldn’t be avoided. I wondered if the empty steps we were using had once been crowded with “Pioneers of Enver” being inducted into the glorious ancient history of the Albanian peoples which “undoubtedly” stretched unbroken back through to the Illyrians! My first visit to Albania was in 1979 and I still have my photos (now digitised) of “happy” youthful pioneers waving at us whilst staying at a summer camp on the banks of nearby Lake Ohrid – perhaps they too had visited this now deserted archaeological site…...

Along the rock face there are (“officially” - but there seemed more) 5 tombs in the form of man-made caves. Some were partly decorated with external ionic pillars and carved porticos of “Hellenistic style” - but it seemed likely from the disintegration of some of the material (which looked suspiciously like concrete!) that this may have been “added” by archaeologists as a reconstruction. 2 of the tombs were on 2 levels with stairs up and seating around - quite “monumental” indeed (photo) but not, I would have thought, possessing “OUV”. They were all protected by somewhat ugly and flimsy roofs extending from the cliff face, presumably erected long ago by archaeologists. All were open for access. Inside, some had empty sarcophagi and others had carved wall niches. Some of the internal carving was very precise with stones having been cut to exactly to fill cracks in the rock. And that is about it! The “on view” remains are, in all honesty, rather limited. Apparently some jewellery and mosaics are on show in the Archaeological Museum in Tirana – but we didn’t see them.

So - what did we gain from the visit? First - A certain satisfaction in getting there. Second - the chance to see some remote Albanian villages and countryside in the full flower of spring time. Third - an entrée to some aspects of the ancient and modern history of Albania which were previously unknown to us. If these are of interest to you then by all means go - but if you want fine archaeological remains then I wouldn’t bother! I certainly wouldn't go in the hope that the site may, one day, be inscribed! Unless ...... I note that it is just possible that Albania could squeeze it in as part of the Lake Ohrid extension. Its UNECO description makes no mention but Criterion iii is claimed on the basis that "The archaeological findings in the castle area of the city of Pogradec as well as the presence of the monumental tombs of Lower Selca in the region are evidence of the ancient Illyrian civilization". I would be very surprised however if ICOMOS were to accept that. It sits 24kms west of the Lake and, as far as I can see, isn't part of the lake's ecosystem. The map of the Albanian extension included in this report (page 4) by the "Ohrid Lake Transboundary Project" doesn't include it even though the text does mention it as "potential".  We will see!

As an aside, it is interesting to note that the 2 Albanian T List sites from 1998, this one and Durres, are the only ones whose UNESCO description is in French - all the later ones adopt English. In 1999 Albania joined “l'Organisation internationale de la Francophonie”. Might that have had something to do with it (indeed, it remains a member)? Durres could possibly be explained since French archaeologists have been (and still are) active there. But, as far as I can tell, Selce has never involved French archaeologists. Perhaps the same source prepared both descriptions? Also Apollonia’s description in English from 2014 might have been expected to be in French since its main archaeologist from the 1920s and 30s, Leon Rey, was French, and French archaeologists still maintain some involvement at the site. However, more recent work there seems to have involved other countries too as well as the EU. Or perhaps it is simply that the inexorable spread of English has been accepted. We certainly gained no sense of any “Francophonie” during our travels in Albania.