Nuragic monuments of Sardinia is part of the Tentative list of Italy in order to qualify for inclusion in the World Heritage List. It is a proposed extension of Su Nuraxi di Barumini WHS.

The Nuragic monuments of Sardinia comprise 31 proto-historic buildings. They are testimonies to the Nuragic civilization, which flourished on the island between the 17th and 6th centuries B.C.

Map of Nuragic monuments of Sardinia 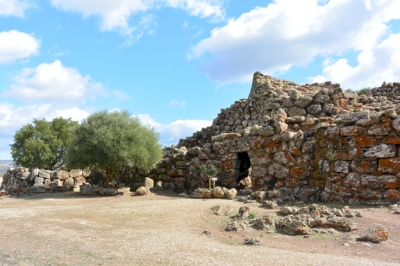 The addition of the Nuragic monumets of Sardinia with 31 components to the TWHS list of Italy in November 2021 was no surprise. It can be taken as an extension of the Su Nuraxi di Barumini WHS, which was inscribed in 1997. Extensions, or better said very extensive extensions - in this case from 1 to 31, might be controversial and contra-productive. However, this is not the case, in my opinion. From the scientific point of view, the original single component has been inscribed under criteria i, iii, iv, while the serial TWHS was proposed under iii, iv, v. Thus, the OUV will be (slightly) changed. The justification is based on 20 years of new excavations and findings. Furthermore, the serial nomination has ambitions to encompass all the aspects of the bronze-age Nuragic culture of Sardinia. It means that the original OUV will be enriched after the possible extension.

I visited only one component of the series in October 2017: No.22 Nuraghe Arrubiu - Orroli, which is located on the mountainous plateau in the southern part of Sardinia. I have very nice memories to the visit. The site was recommended to us by the stuff of the visitor center of Pranu Muttedu (another TWHS) as one of the finest archeologicel site of Sardinia. Nuraghe Arrubiu is quite remote but beautiful place (we went by a rent car), however, parking lot and quite big visitor center is well prepared for tourists, but there were only few other visitors in October. The ruins of the original Nuraghe is quite big and it consists of 5 towers surrounded by fortifications. The reconstructed appearance of the "castle" shown in the visitor center looked very monumental with around 25 m high central tower. Now it is lower because of a partial collapse. Despite that, the site is still interesting to explore and the main constructions are still well preserved.

One can have objections if the extension is really necessary and if the original Nuraghe would be enough. I would say that I have no problem with possible extension in this case. All the Nuragic structures have unifying and even for layman easily recognizable style. From the practical point of view, it is enough to visit a few of them to have an idea what Nuraghes are about. Now, you need to travel to the fairly remote component in Barumini for ticking off the Nuragic WHS...

Together with Domus da Janas pre-Nuragic TWHS, the serial Nuragic T-site would be valuable addition to the long WHS list of Italy.

The site has 31 locations