Beng Malea Temple is part of the Tentative list of Cambodia in order to qualify for inclusion in the World Heritage List.

Beng Malea was a large scale, now mostly collapsed Khmer temple complex along the Royal Road. It was built as a Hindu sanctuary. The temple-town had extensive hydraulic features. In its art and architecture it is one of the most interesting of the Khmer complexes. 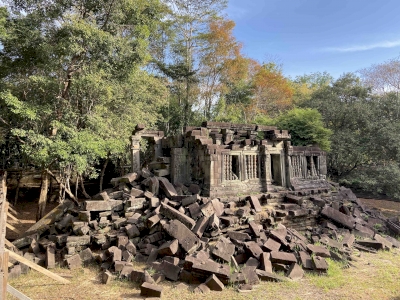 Nowadays when we travel, we order drivers through our hotels and this was the case with three days we stayed at Siem Reap as well. We lodged at Model Residence, the name doesn't evoke anything, but in reality it was a pretty place in the quiet part of town, about two kilometres from its wild city centre. Given the hotel surcharge for arrangement, our driver was not the cheapest, but he had many years of driving tourists around Cambodian sites under his belt so he always knew where he was going and was very accomodating.

First day we started with Beng Mealea, sixty-something kilometres from Siem Reap. It does not belong to the core zone of the Angkor Wat WHS, being on the Tentative list at present, however it's managed by the same ticketing company, so you can not only use your multi-day Angkor Pass to visit, but also buy it at a ticket booth couple of kilometres before the actual site. It was about eight in the morning when we got there and because our driver parked by the more secluded entrance (there's a different one with parking for buses), we managed to get in before a large group of tourists did.

Maybe because it was my first visit of a proper Angkor-period temple, or due to lack of tourists in combination with general state of disrepair, I really enjoyed it. Despite there being a proper Tomb Raider temple by Angkor - Ta Prohm, which served as a filming location for the movie, this one felt much more authentic. I really enjoyed the fact there were wooden bridges and staircases built around the whole temple, so we could climb around and explore to our heart's delight. There are also many places with rock blocks thrown around on a large heap leading to a door, or trees growing inside and around the walls. Morning light did us many favours and we made some lovely shots.

From Beng Mealea we traveled on to Koh Kher and Preah Vihear. 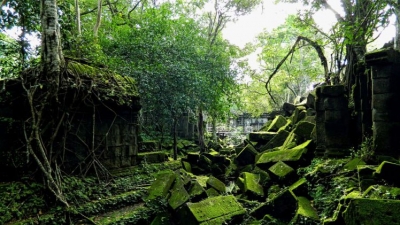 Beng Mealea is about 75km away from the main group of the Angkor temples, therefore it is quite isolated from the rest of the archaeological area. It’s mostly surrounded by thick forest and it’s mostly collapsed. What is really interesting about this temple is the mystery that surround it. It is known that it was built during the Angkor Wat period, because of the architectural style, but its history is unknown. And yet, it is one of the largest Khmer temples. Moreover, being so isolated, not that many visitors reach this temple and private transportation has to be arranged. In my opinion, the hassle and the higher cost to get to Beng Mealea was totally worth it. That day I really felt like those explorers who found this temple after it had been forgotten for centuries in the jungle.

This ensemble is a clear example of a jungle temple in Cambodia. Many trees grew on the temple ruins however beautiful apsara carvings and statues are still visible. It really should be included with the Angkor Wat listing but the fact it isn't yet probably means less tourists visit and therefore is a perfect temple to explore in peace and quiet.