Group of Mozarabic buildings on the Iberian Peninsula

Group of Mozarabic buildings on the Iberian Peninsula is part of the Tentative list of Spain in order to qualify for inclusion in the World Heritage List.

The group of Mozarabic buildings consists of ten pre-Romanesque churches and monasteries in northern and central Spain, dating from the late 8th century to the mid-11th century. Mozarabs were Iberian Christians who lived under Muslim rule in the Middle Ages and adopted elements of Arab culture. The Mozarabic architectural style is characterized by the assimilation of Islamic motifs like horseshoe arches, alfiz frames and the use of pillars and columns.

Map of Group of Mozarabic buildings on the Iberian Peninsula 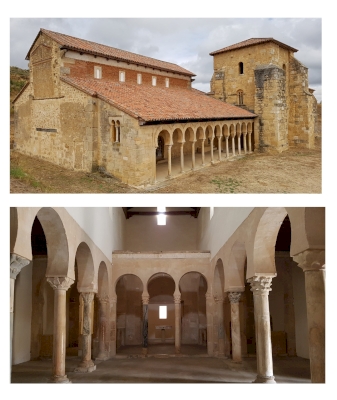 We have so far visited four of the buildings of this TWHS, scattered across Spain. Visigoths ruled Iberia after the collapse of the Roman Empire; they converted to Christianity and developed their own art and architecture, incorporating elements from Rome and Byzance. During the 8th century, Muslim Arabs took most of the peninsula, with independent Christian kingdom surviving only in the northernmost area (Asturias). Christians who stayed and lived in the Arabic kingdom were called “Mozarabes”. During the 10th century, Christians started to take back control of Spain, moving from north to south. In these newly (re) conquered territories, they built churches and monasteries combining all these different styles – for example, they had an extensive use of horseshoe arches and alfiz (the “frame” around the arch), already famous from Cordoba Mosque, mixed with symbols commonly used by Visigoths (birds, plants) and technics from Romans (basilical layout of the buildings, columns, etc). Some Mozarabes also moved northward as conditions for Christians became more difficult in the Arabic caliphate, and this contributed to an even bigger exchange of traditions and art between the different states.

San Miguel de Celanova was built as a private chapel next to a monastery. That’s a tiny building from mid of 10th century, and this is probably what saved it: the monastery grew and was rebuild at different times, but the chapel remained intact in the backyards. It is claimed to be the only totally intact “mozarabic” building in Spain, hence its great importance. From the outside is looks like the juxtaposition of cubes, while inside is all (horseshoe) arches and cupulas. Narrow openings diffuse a sweet natural light inside the building, and we were told that on equinox days, a sun ray just goes through the chapel from one opening to the opposite one. It can be visited by guided tour only, and not all visitors can fit in it at the same time (it could just accommodate our family of four!). We visited on a Sunday, and the only tour on that day was at 12:30 (more tours run during week days, check the website of the city). Ticket are to be bought at the Tourist information point, which is housed in the aisle of the monastery that lays along Celanova city main square, next to the church of the monastery, which is nowadays used by the faithful of the city – impossible to miss it. The tour also goes through the Baroque cloister of the monastery, while the church can be visited freely. There is a big and free car park at the back of the monastery, from which actually you can already spot the chapel – but there is nothing like actually visiting it, of course.

Santiago church in Penalba village used to be the church of a monastery. It was built a few years before San Miguel de Celanova and has the same layout and external aspect, including the exact same decorated modillions. Unfortunately, we were there on a Tuesday, and the church is closed from (and included) Sundays afternoon to Tuesdays, even during summer. We were left with walking around, spotting architectural details such as the double-horseshoe-arched door. The village of Santiago is one of the “most beautiful villages” of Spain, of typical mountain architecture (it stands above 1000 m asl), at the very end of a magnificent valley. As we visited on a rainy day (August in North West Spain…), the traffic from the direct road was diverted through a pass called “alto de la Cruz”. The last kilometres, going down the valley to reach the village, are truly breath-taking. This road and the walk through the village redeemed our efforts to reach that place, despite the church remained closed to us. As a side note, I do not see the point to keep such a famous monument (and the only one of the villages) closed for 2.5 consecutive days during high season. We tried to engage (in Spanish) with the locals, but none of them was willing to do so.

We were more lucky at our next visit, at San Miguel de Escalada : we visited on a Tuesday, on which visits are free (it is closed on Sunday afternoons and Mondays, though). This one was the church of a monastery built by Christians who had flown from Cordoba at the beginning of the 10th century, and is the iconic example of Mozarabic building in Spain. An elegant, “Cordoba style” colonnade was added along one side of the church a few years later and, thankfully, the Roman part of the monastery developed next to this church, which thus survived intact till today. The inside is elegant and pretty well preserved, and decorations mix the different patterns already mentioned in introduction.

Finally we visited Our Lady shrine in Quintanilla de las Vinas. I was honestly very surprised to see this building on the list of “Mozarabic buildings”, as it is very well known in Spain for being a Visigoth monument (thus built some centuries earlier). All along the way, it is sign-posted as “Visigoth church”, and the guardian, a man passionate about this building, did confirm so. Unesco website explains the origins of the shrine are being re-evaluated, still this sounds strange. (I think at least one other monument of this TWHS is usually referred at “Visigoth” as well: San Pedro de la Nave). Nevertheless, this is still a very interesting place to visit. Only part of the shrine remains: the nave is gone, such are the two ends of the transept. What remains is the choir and the crossing of the transept. External walls are adorned with horizontal friezes, showing plants, birds, grapes, etc. The inside is also well worth a visit, for the main horseshoe arch and the sculpted capitals depicting Sun and Moon surrounded by angels, maybe a representation of Christ and Virgin Maria mixed with older pagan gods? Anyway this gives a feeling of very ancient building and times. It is easily appreciated from the inside that only part of the building has survived, with, for example, the (modern) roof just placed on top of the remaining walls to protect them.

Having visited these four places, we can only say we would like to visit the other missing six! There is no doubt these buildings are of great historical importance, mixing in a unique way influences from several important past civilisations. Chronologically, they would fill a gap between already inscribed properties: Asturian monuments and Cordoba Mosque on one hand and Mudejar buildings on the other hand. While I believe all top sites of Spain are already on the list, these buildings are one of the most promising TWHS for this country. I would be interested in seeing how the alleged “Visigoth” origin of some of them will be handled. What about a “Visigoth buildings in Iberia” TWHS in the future? – just kidding. 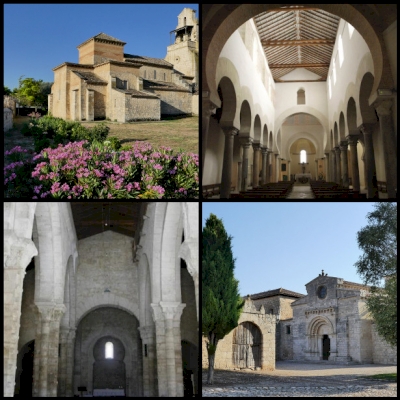 In July 2020 I visited 2 locations of this tentative WHS, namely the Mozarabic Church of San Cipriano in Cebrian de Mazote (top photos) and the Mozarabic Church/Ossuary of Santa Maria in Wamba (bottom photos), both close to Valladolid. Something worth keeping in mind when visiting is that both are closed on Mondays.

The Mozarabs were the Iberian Christians who lived under Moorish rule in Al-Andalus. Although their descendants remained unconverted to Islam, they were mostly fluent in Arabic and adopted elements of Arabic culture. The local Romance vernaculars, heavily permeated by Arabic and spoken by Christians and Muslims alike, have also come to be known as the Mozarabic language. Most of the Mozarabs were descendants of Hispanic Christians and were primarily speakers of Mozarabic (late Latin of Iberia) under Islamic rule. They also included those members of the former Visigothic ruling elite who did not convert to Islam or emigrate northwards after the Muslim conquest. Spanish Christians initially portrayed Muslims primarily as military or political enemies, but with time, Islam came to be seen as a religion and not merely a threat.

The Mozarabs of Muslim origin were descendants of those Muslims who converted to Christianity following the conquest of Toledo, and perhaps also following the expeditions of King Alfonso I of Aragon. When comparing this tWHS to the already inscribed Mudejar architecture it is worth mentioning that the Mozarabs of Muslim origin who converted en masse at the end of the 11th century are totally distinct from the Mudejars and Moriscos who converted gradually to Christianity between the 12th and 17th centuries. Some Mozarabs were even Converso Sephardi Jews who likewise became part of the Mozarabic milieu. Separate Mozarab enclaves were located in the large Muslim cities, especially Toledo, Cordoba, Zaragoza, and Seville, which in a way helps understand why the 10 best Mozarabic remnants which make up this tWHS are scattered around Spain.

The Church of San Cipriano in Cebrian de Mazote is a 10th century structure built on the grounds of a Visigoth settlement. It has a basilica ground plan with two apses at the front and at the rear part of the church since two opposite apses were required by the Mozarabic liturgy. It has three naves with the middle one being bigger and taller than the other two and separated by a series of horseshoe arches between marble columns with magnificent capitals. Outside, the restoration works have unveiled further Mozarabic elements which initially adorned this church together with an early irrigation system.

The Mozarabic Church or Ossuary of Santa Maria in Wamba is one of the oldest temples in the Valladolid area. It is of Visigoth-Mozarabic origin from the 7th to the 10th centuries. There are also the first Romanesque style paintings in the main chapel. Most visitors to this place will probably come more for the ossuary than the Mozarabic elements. It has been suggested that Wamba was repopulated by people coming from the north and that for this reason the architecture is closer to the Visigothic and Asturian influences than other buildings in the region such as the church at San Cebrián de Mazote which was repopulated by Christians who came from Al-Andalus.

I really enjoyed my short visits to these places and hopefully I'll try to visit the others in the near future. While travelling between these two locations, an interesting stopover is the Torrelobaton Castle, one of the most important and best-preserved fortresses in the Valladolid area, built as an expression of the strength of the influential Enriquez family, whose capital was at Medina de Rioseco.

Unesco Website: Group of Mozarabic buildings on the Iberian Peninsula