Mértola is part of the Tentative list of Portugal in order to qualify for inclusion in the World Heritage List.

Mértola is located in the rocky landscape of the eastern Alentejo on a hill above the mouth of the Río Oeiras in the Río Guadiana. Due to its strategically favourable location, Mértola was an important river port and trading hub in Classical Antiquity and the period of Umayyad conquest. The most significant historical building is the Church of Nossa Senhora da Anunciação built in the 12th-century as a mosque. 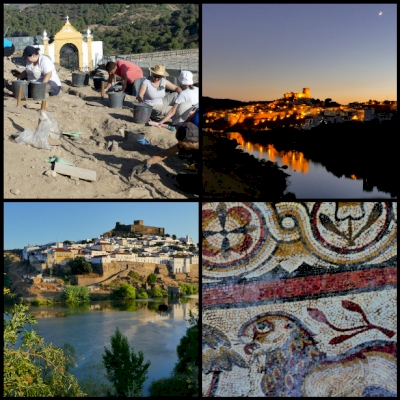 I visited this tentative WHS in July 2020. First of all, due to the amount of historic points of interest and limited opening hours (as well as the different lighting for photography), I'd definitely suggest staying over at least for 1 night.

Mertola is located on a hill over the Guadiana River, which is a very important life source for many birds (I unexpectedly managed to spot a pair of Golden Orioles near the river banks), fish (with as much as 6 endemic species of river fish) and fauna. Although Mertola is known as the national hunting capital of Portugal, there are a number of nature and biodiversity conservation programmes and initiatives going on such as the reintroduction of the Iberian lynx, even though its habitat clashes with locals' driving/speeding habits. The town owes much of its historical importance to the Guadiana River. Its strategic location made it an important fluvial commercial port between Alentejo and other parts of Al-Andalus (Arab Hispania) and Northern Africa, from the Roman times (the GR15 Great Guadiana Hiking Route passes through the Via Romana) up until the Umayyad conquest of Hispania. In the early Middle Ages, the Guadiana River lost most of its importance which led to the decline of the port of Mertola. However, the discovery and modern exploration of lode mining (the process by which gold is extracted directly from underground ores) in the Serra de Sancto Domingos, gave new importance to the river and town.

Mertola's main church, the Church of Nossa Senhora da Anunciação or Igreja Matriz, is the only medieval mosque to have survived this period in Portugal. It is an 11th or 12th century Almoad mosque with 4 arched doorways capped by a mirhab. In the area between the church and the Mertola castle, there's an interesting archaeological area, where works are very much still in progress. During my visit, I had a lovely chat with some of the local archaeologists on duty who kindly offered to accompany me around the uncovered area and provide some context to what I was seeing. Obviously, this was a highlight during my visit as the current findings are far from intact and I would have definitely missed some of the details. Even if you visit outside opening hours, you'll still be able to get a reasonable overview and a glimpse of the 6th century baptismal font.

That said, the most important findings are the mosaic fragments depicting a combination of mythological creatures, hunting scenes from ancient times with birds and felines, and Christian symbolism. My favourite fragments portrayed the mythological struggle between Good and Evil, adapted to the Christian liturgy of the period. The Classical hero Bellerophon, in the figure of Saint Michael or Saint George, kills Chimera, the demonic monster with the serpent's tail that spits fire from its three heads. The image of Chimera is almost intact but as for Bellerophon, only the head of his horse Pegasus is visible and the lance that pierces the monster. The rest of the excavations cover (or rather uncover) the Barrio Islamico.

An interesting area of Mertola is the yellow painted district (as opposed to the whitewashed rest of town) of Alsafir, still mostly inhabited by Muslim artisans. The nearby small museum of local Islamic art was unfortunately closed during our visit but it might be worth visiting when open. From here, I explored the area around Torre do Rio and the remains of a granary. The River Tower, next to the ancient river port and controlling one of the most important entries into the city, was a prominent link in the defence system of the ancient late Roman city. An access route inaugurated on a solid series of arches allowed this armour tower to connect with the interior of the city walls. Most probably, also judging by the remains on the opposite side of the river, this port defence system was completed by an iron chain, thrown across the river, that controlled navigation.

The best viewpoints to gaze at the town of Mertola are from the modern bridge at sunset or early in the morning from the opposite river bank at Alem Rio (which offers limited but excellent opportunities for parking/accomodation). I'm really glad I visited this tentative WHS and I think it has the potential to be inscribed. 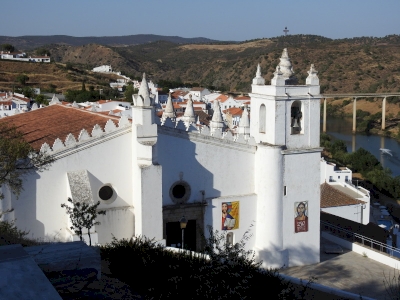