Qinghai Lake is part of the Tentative list of China in order to qualify for inclusion in the World Heritage List.

The Qinghai Lake is an inland saline wetland of international importance. It is the largest inland saline lake watershed, the huge water body and the surrounding water system has given birth to the vast and unique plateau inland wetland ecosystem, providing ideal habitat for many wild animals. Qinghai Lake is located at the crossroads of the Central Asian and East Asian Flyways. As an important stopover for migratory birds, each year hundreds of thousands of birds rest in this area during their migration. 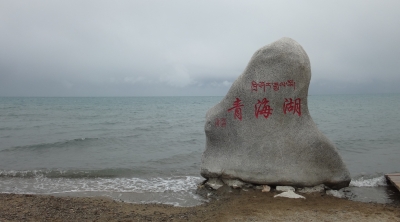 Qinghai Lake is around an hour by car from Xining, the biggest city before the Tibetian Plateau starts to have the population density dwindle down at the west side of the country. This is obviously the best base to visit the lake area and there a dozens of tours offering day trips including the 5th biggest Buddhist monastery in the world, Ta'er. This is also a really easy way to do the tour. I went in late September and the weather was already really cold. My original plan was to stay at the lake in one of the original tents, the owner even saying it is still possible, but after arriving I saw there was nothing and I canceled the plan and instead stayed back in Xining to enjoy more Muslim food.

The biggest draw of Qinghai Lake is the amount of birds that nest/live here. Being such a massive lake it is hard to get see some maybe, but the areas around the lake aren't exactly towns or even buildings so there is plenty of space for the birds at the shoreline. There were no more boat tours in September which are most likely very popular in summer. These tours will get you closed to the bird populations on the islets such as Sankuaishi. Birds were actually all gone in September, really disappointed. I had a coworker and she told me she went a little bit earlier and she saw 6 birds. I asked if those are 6 birds on the rock but she said 6 in total at the entire lake... Do try to go in summer even if that means more tourist crowds.