Ras al Had Turtle Reserve and the Heritage Site of Ras al Jinz comprises a coastal reserve with archaeological sites. It is one of the most important nesting areas for green turtles in the Indian Ocean. The nature reserve also has tidal mudflats, mangroves and coral reefs. The culture element includes remains of graves and settlements. 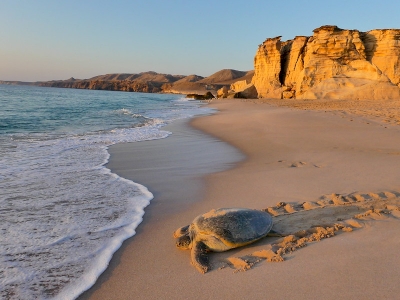 I visited this tentative WHS in December 2020. Instead of a simple night tour as a walk-in guest as initially planned, we decided to spend 2 nights here with 2 sunrise tours and 2 night tours included, after Oman announced an exit ban just a few days before our planned departure date. This turned out to be a real treat as we increased our chances to experience hundreds of baby turtles hatching and enormous adult turtles coming ashore to dig their nests and lay their eggs.

Apparently, this year's khareef monsoon season (June to September) in Dhofar was particularly intense with constant flash floods, high winds and rough seas. Moreover, in November there was a tropical storm which developed into a category 1 tropical cyclone named Gati which wreaked havoc in the Horn of Africa and the Gulf of Aden. As always, nature seems to instictively predict and quickly adapt to such events, and local fishermen have reportedly seen hundreds of turtles mating at the surface of the water close to the Ras Al Jinz/Ras Al Hadd beaches as late as October and November. In general, turtles lay their first clutch of eggs about 3 to 6 weeks after mating.

This probably explains why this year's peak season for spotting adult turtles digging their nests and laying their eggs came much later than the usual July to September months which tend to be also the hottest! This does not mean that you won't see any turtles in the other months but your chances decrease and you're likely to see one or two which you could see in many different places around the world, instead of the scores of adult turtles that come here and that make this place special. Also, 5 different species have been recorded in this area (Loggerhead, Leatherback, Olive Ridley,  Hawksbill and Green turtles) but more often than not you'll spot green turtles on the beaches. Interestingly, when female adult turtles reach maturity they tend to return the same beach where they hatched years before which is why the Ras Al Jinz Scientific Centre and Museum is doing an excellent job by protecting the area while raising awareness to appreciate these gentle creatures. Maturity may range from as early as 7 to 13 years for leatherbacks, 11 to 16 years for Olive Ridleys, 20 to 25 years for Hawksbills, 25 to 35 years for Loggerheads and 26 to 40 years for Green turtles.

Both the night tours and the sunrise tours start when it is dark, so a torch is recommended especially to walk the few initial kilometres on gravel terrain from the museum or security guard's place to the beaches. A team of people regularly monitor the beaches after sunset till sunrise and after they give some turtles enough time and space to crawl up the beach to search for a nesting spot to lay their eggs (this process can take from one to three hours and there can be as much as five daily attempts depending on the weather and dryness of the sand), a number of guides are called at different points along the beaches (the farthest one being the smaller area used by local fishermen too). Once you reach the beach, you must switch off your torches and the guide uses a red light to show you, at a distance, the huge turtles nesting without disturbing them too much and if you're lucky a white light directed at their backs to show you the turtles laying their eggs. It is really impressive how they use their front and hind flippers differently to move on the sand and to dig the real nests and the decoy nests.

Sea turtles lay up to 100 eggs, which incubate in the warm sand for about 60 days. The temperature of the sand determines the gender of baby sea turtles, with cooler sand producing more males and warmer sand producing more females. The phenomenon is called temperature-dependent sex determination and is a phenomenon seen in other reptiles like alligators and crocodiles. When the tiny turtles are ready to hatch out, they do so virtually in unison, and every time we happened to spot them coming out of the sand was indeed a special moment we'll treasure. Once hatched, the turtles find their way to the ocean via the downward slope of the beach and the reflections of the moon and stars on the water which is why it is important not to use white light away from the sea as they will follow it and head in the wrong direction. Hatching and moving to the sea all at the same time gives them a better chance to overwhelm awaiting predators, which include sea birds and desert foxes.

Only a handful at best out of every hundred survive this race to the sea and in the sunrise tours you'll also see the whole circle of life in action, with sea gulls feasting on the tiny turtles. The sunrise tours are also better for photography, especially the last minutes of the tour, so make sure to keep closest to the sea as possible and keep your fingers crossed to spot a turtle crawling back to the sea. You'll also be amazed by what seem like countless tyre marks on the beach but which in fact are turtle trails! Staying at the rather expensive hotel or tents will also grant you access to the beaches from 8am till 4pm. When we visited we had the place all to ourselves and we also managed to rescue a couple of baby turtles which most probably had mistakenly headed towards the hills instead of towards the seashore. The scientific centre restricted area and beaches also accessible by some local fishermen is the best area preferred by most turtles but the freely accessible Ras Al Hadd area a few kilometres away is also a nesting area and the nearby Khor Al Jarama is a great area for birdwatching especially closer to the khareef months.

There are also a number of scattered archaeological remains which are still being excavated (work only started since 2017 but they are believed to be the remains of an Early Bronze Age settlement - more info can be found here: https://www.archaeological.org/fieldwork/the-ras-al-jinz-project/) but the OUV of this tentative WHS is natural rather than cultural. Perhaps Oman would be better off grouping this tentative WHS with the Ad Dimaniyat Islands and the Al Hallaniyyat Islands but even on its own I'd be in favour of inscription (Oman has a still lot of potential for natural WHS after the delisted one of Al Wusta). 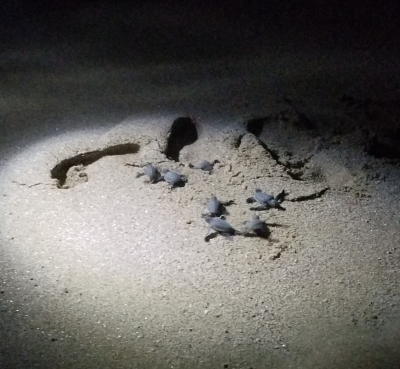