Western Xia Imperial Tombs is part of the Tentative list of China in order to qualify for inclusion in the World Heritage List.

Western Xia Imperial Tombs are the royal mausoleums of the emperors in the Western Xia Dynasty (1038-1227). The tombs are the best-preserved historic cultural heritage representing the Tangut civilization at the largest scale and in the highest rank. Occupying a special position in the Chinese history, the West Xia civilization made great contributions to China’s diverse culture. 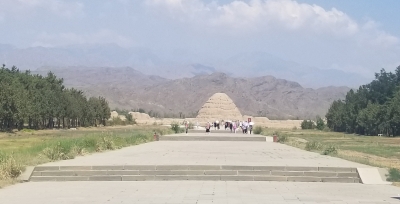 Once a mighty force, the Tangut Empire... wait, who?! If you have heard of the Tangut Empire before you must have either been to the tombs before, be a Chinese History major or maaaaybe just picked up tiny bit of info on it in some museum or wikipedia. Well, so the Tanguts had an empire from 1038 to 1227 in northwestern China (this according to Wikipedia). The empire got totally destroyed by the Mongols and traces of it vanished until the 20th century when the imperial tombs where discovered near Yinchuan, Ningxia, which was the empire's former capital.

The tombs are a quick 30min cab ride from the city center (rail station). Upon arrival you are greeted by a massive visitor center/museum that makes any city's town hall look small. The museum isn't actually that big and only has a few halls. The ceilings are just so massive and want to seem imposing, perhaps because the tombs stand tall too (or maybe the cinema takes up so much space, I didn't go inside)? Yinchuan is super hot in summer so staying in the cool museum is very welcoming. You also get a great introduction to the Western Xia (Xī Xià), see many artifacts, get you ready to see the real thing later. Well, let's be fair, the imperial tombs are a not the greatest to see from the outside.

After having seen everything in the museum you can trek through an underpass to the opposite side of the highway. That they would construct a highway passing right next to the mausoleums is controversial on it's own but maybe more questionable is why they visitor center/museum isn't on the opposite side of the road already - perhaps because there could be potential dig sites they don't want to uncover by accident and damage, and if you are thinking "oh I know how they do it, parking is miles away and then a mandatory e-shuttle ticket to get to the real site" which they do so often in China, but the e-bus is free in this case. Nevertheless, it will take you a long 5-10 minutes to get to the bus stop and luckily it's mostly in a cooling tunnel.

The shuttle takes you on a 10 minutes round trip through the tomb sites. There are six tombs in total. You can see #4, #5 and #6 in the distance but it's way too far for a good look or good picture. Tomb #3 is closer but covered up by tree lines - yet another odd decision. Well, fret not because the bus will drop you off at #1 and #2, as pictures in our website's main picture. My picture is the main path leading to the biggest #1 tomb. You can walk around here all you want - in the summer heat it's almost unbearable - but apart from close-ups of the tomb you don't get much out of the trip. The tomb itself is unique though, not super pretty but definitely adds plus points to what I can say is a definite inscription if it ever gets its turn.

With most tomb items having moved to the museum it feels a little strange the the tombs are still worthy to be inscribed but so be it. Its a glimps into a history of our time that we hardly know and thought was lost, and their culture, language (a harder version of Chinese characters - quite the opposite of the 20th century's simplification) and styles were very unique. They also had effects on the surrounding empires such as the Liao and Song, that thee Tanguts' achievements lived on in theirs and has rippled through the ages. Well, all but the Tangut script which we probably don't miss.