Darwin's Landscape Laboratory is part of the Tentative list of United Kingdom in order to qualify for inclusion in the World Heritage List.

Centred on Down House, the former home of renowned naturalist Charles Darwin, the landscape laboratory includes the planned garden and surrounding countryside. This was the residence that Darwin and his family lived in for 40 years, including whilst he wrote his seminal work The Origin of Species (1859). It was in this location, 20km from central London, that Darwin formulated and researched his theory of evolution by natural selection. The landscape influenced his thinking and the garden showed planting that was directly influenced by his experimental ideas.

Side-stepping a discussion of the merits of inscription, it’s worth drawing attention to the mulberry tree at Down House. It survives from Darwin's day - though now needing to be propped up - and still produces mulberries. All despite being filled with concrete…. 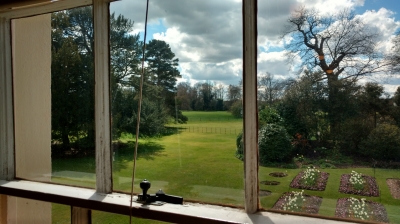 Courtesy of yearly visits to a supplier based in London plus friends with a gorgeous flat on the Thames I have been in London at lest once a year for the past decade. Ian can attest to it as we tend to have a few pints in the process.

Apart from the bar visits, the walks along the Thames and the German school in Greenwich we normally try to include an excursion, if possible WHS related. But after a few years we had tackled all WHS of the extended London Hotspot plus most of the surrounding tentative sites. Eventually all that was left was Darwin's Landscape Laboratory in Downe. So on a Sunday in summer, we drove by car to Downe to see what the tentative site was about.

Quite frankly, the site was underwhelming. This is a typical, not even especially beautiful English manor of the period. The gardens show very little actual gardening and are not impressive.

The on site museum tries to tell the story of Charles Darwin's life, his family and his research. I tend not to enjoy these too much. But I learned two things of note in the process:

The key problem with the site is that the connection with Darwin's work is primarily via the location: This is where Darwin slept, ate and sat in his study. The critical parts of his research, meanwhile, were conducted elsewhere. So, in the end this site is more about the intangible idea of evolution than a tangible part of Darwin's research. Consequentially, this does not belong on the list.

We drove by car. On our way back my friends left me off at Camden from where I went directly to Gatwick Airport for my flight back home. 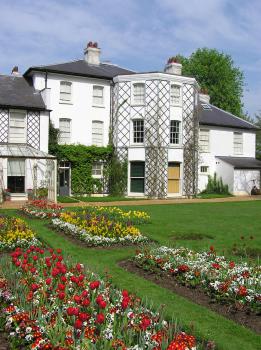 This is an interesting place to visit and one that is incredibly linked to one of the most influential thinkers of the modern period. However I am not sure if it is quite good/ coherent enough to merit a place on the World Heritage List.

The house itself is reasonably grand but mostly unremarkable, and the garden is pleasant with a few small hints of it use for the cultivation of plant species that helped reinforce Darwin's belief in the evolution of species. I found it quite hard to make any concrete links between what was in the garden and its influence on Evolutionary theory, perhaps a good tour guide would be able to eek these facts out. There was however a pleasant walk through the southern English countryside at the back of the garden, it was laid out especially for Darwin to give him time to think and stroll, and it certainly can serve the same purpose for modern visitors. There is an audio tour of the house, narrated by the peerless Sir David Attenborough, who is something of a British cultural institution, and this did a good job of explaining Darwin's life in the house and the works he is most famous for.

The house is located just outside London, but still inside the southern boundary of the M25 ring road, if you don't have your own transport the you can get the train to Bromley South where bus 146 can take you on to the House.

This was an interesting site to visit, and had key links to one of the key thinkers who has shaped the modern world, however I personally didn't feel the link was tangible enough to warrant a place on the World Heritage List. If it does make it on I may well venture down for a repeat visit to see if I can pick up on what I missed the first time around.

"Requests the World Heritage Centre to organize a meeting for deliberating on sites presenting Outstanding Universal Value, essentially on an associative basis."

Withdrawn at request of the UK