Les « coules » de Petite Valachie is part of the Tentative list of Romania in order to qualify for inclusion in the World Heritage List.

The “coules” of Little Wallachia are tower-houses. They are three or four levels high and were used by nobility. They were usually built at strategic points to watch the passages. 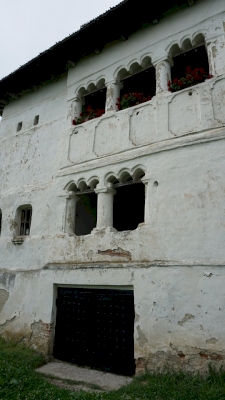 In the heart of Romania, The Oltenia-area is a land dominated by wide fields and gentle hills, represented the granary and, on the other hand, the good wine or the fruit distillate.The small local governors - the boyars, have accumulated over time wealth, through the exploitation of poor-people and the fruitful land. But as they all have a price, insurers for the protection of goods had to be taken.
Hard to believe, but on the territory where the Wallachian population lived mainly in specific medieval dwellings dug in the ground, it can be noticed here constructions that anticipated the appearance of blocks with 3-4 levels.
The word "cula", which draws its origin from the Turkish tKula (tower), designates such creations, specific here only to the Oltenian area.
And why the Ottoman influence? Well, it was from then on that the boyars of the place appeared to protect their household and their lives, by striving to erect buildings with 2, 3 or even 4 levels - small fortresses.
Their location was strategically designed, it would have been easy for them to retreat in case of distress, but to observe their movement in the distance, and from all sides fire could be carried through numerous firing holes.
And it was not just the fear of the Turkish-attacs from the top of the Danube, but also to the haiduks of the place, who could easily access from the surrounding area.
Despite the lack of interest of the central or local authorities, we have found near them good hearted people who care for the memory of the place and the historical buildings of the present.Some coulas are simple, raised on a square base, with an internal staircase.All of them have an open space at the top, like a terrace, from here one can contemplate the landscape or observe dangers.
The interiors remind us of the time of the long pistols and the sculpturally decorated flint, which left many legends in place.
The best preserved and well-kept ones are those from Măldărești, two steps from Horezu, in Vâlcea, where a complex was organized: Cula Greceanu, Cula Duca, the Duca Memorial House and the Old Church, are all elements that must be visited for understanding the history of the place.
Cula Greceanu, the oldest of the 18th century, has a special charm. The outside is surrounded by a hard stone wall, the old door having a special locking system. The yard is large, everything is abundant green, but well maintained, and on the side is an old dwelling, with red flowers and a wooden cross porch.
The interior preserves original furniture, and some rooms have a very well maintained fresco, as well as the popular port that is present in the place of honor.The stoves in each room are different, the tubing looks like a miniature organ.
The upper terrace leaves the viewer with a panorama of sensation, and the bridge trembles with a small attic where the access is made on a wooden staircase, which, if necessary, can be withdrawn with haste.

Cula Duca, a bit newer, belonged to the Maldăr boyars, has a huge cellar, supported by heavy wooden pillars, carved with local motifs.
The access is made on a short staircase, its ceiling being painted in vivid colors. On the first floor there is a true museum, the objects of everyday life, old furniture, styria, but it attracts the room with a colossal stove, with the royal crown of black iron.
Upstairs there is a wooden door trapped in the ceiling, which still has multiple security systems. It is a delight to watch from the terrace, and on the ceilings we find the family coat of arms.
Across the road, Casa Duca is an unaltered story of the former prime minister of the interwar period, who fell victim of the assassination organized by supporters of the Iron Guard. Inside, the rooms are still preserved and the bohemian air for 100 years now, the gramophone is still working over there, the chiller looks like you are opening the casket and putting it to work, the library also becomes a bidder to get tired of the couch next door. What amazing times ...