Archaeological Site of Perge is part of the Tentative list of Turkey in order to qualify for inclusion in the World Heritage List.

Perge was an ancient Greek city. An acropolis located there dates back to the Bronze Age. The city was walled and gates, bastions, and towers show its military architecture. A water channel crossed the Colonnaded Street, supported by four monumental fountains and two baths.

Map of Archaeological Site of Perge 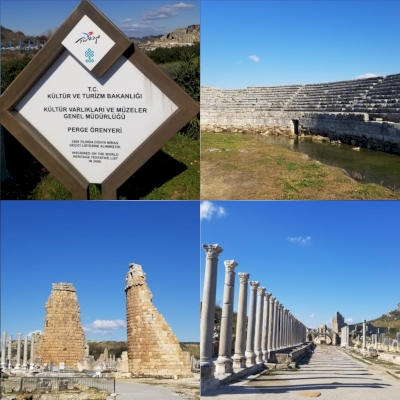 Seems to be some mix feelings about the site because I suppose it's "just another ruin" like so many others in southwest of Turkey. However, this one was grande and stands out quite a bit. Restoration was mainly done 50 years ago, with some pillars clearly mounted later than that, and the two diggers used in the project are even for display.

There is a theater outside of the visitable area, decent shape but nowhere like the nearby Aspendos, and the stadium is only half there which is still more than what many sites can say though. Additionally, many columns were re-errected and more could have, to show the city structure with column-littered roads.

I really enjoyed walking along these roads, reading the few signs available, and even went up the hill to the terrace for a nice view of town. There are still covered up areas of the town and it would make it even more impressive. I think the main problem is that many buildings are just there without much info, I didn't get the audio guide but even then you cannot even walk to some and get a better look. With some work this could be restored really well but I understand there is no money for all that, and with the little love the site gets I think it's not going to get improved.