Miao Nationality Villages in Southeast Guizhou Province is part of the Tentative list of China in order to qualify for inclusion in the World Heritage List.

Miao Nationality has a unique cultural tradition of its own. Distributed in lofty ridges and towering mountains or in the depth of forests, the rationally laid out villages are unique in architecture, ancient and simple in custom, and strong in life flavour. They also reflect the course of evolution of their culture, the relationship between the unique natural environment and human residences, and the diversity of human culture. 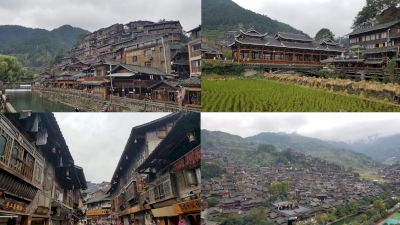 With the countless Miao villages around the country I must have visited a dozen already. Miao minority has become one of the most popular tourist ones due to their festive dances and especially the dress and silver jewelry headdresses. The nomination only specifies a certain portion of villages in the southeast of Guizhou, where according to the 2000 census 48% of the Miao clans live. Currently the site doesn't specify which exact village (it says 21 villages) but rather a range of where these villages are. I went to two of these for sure: Datang and the biggest one - Xijiang aka Xijiang Qianhu. I will focus on the latter because I feel that is more likely to be inscribed even with the very commercial nature that has befallen it.

Xijiang is an hour away from Kaili, the biggest town in the area. You can either take the normal coach from the city center or directly from the high-speed train station. I would actually recommend the latter even though I didn't personally do it. I stayed in town and the traffic there is pretty tight. It will take the bus 20-25 minutes just to reach the city's edge and if you go directly from the railway station you are saving all that hassle. You should stay in the village over night rather than Kaili. Once you reach the tourist center you have to get a ticket (100 yuan), then choose to get an e-bus ticket (it's 20 yuan), or walk to town for ~10 minutes flat along the river. I would actually lean towards walking BUT the bus ticket also includes a ride up the hill to the lookout point and back, something you don't really want to walk, not because it's super steep (well, it is), but the path along the road isn't made for pedestrians sometimes. The lookout is nothing you want to miss, especially at night which I...well, did. Sad.

Xijiang boasts 1,700 years of history and it isn't a surprise the clans settled here. The river brings fresh water, their famous miao yu (fish), the mountains surrounding them for rice fields, protection, good air - it's a wonderful place. Nowadays they also felt the need to plant an ugly poison green basketball court in the middle of this - ugh. Even though the place is super commercial and touristy, their culture is not lost here. The houses are more or less authentic, the architecture design which I'm very much into can be seen at every corner. There is a big square in the middle of town used for the festivals everyone is so fond of. Right next to it is a free museum that has descriptions about the Miao culture, history and lifestyle, but it was very lousy and I hurried through it. There was SOME English if I remember correctly, if you want to need to know that vase you are looking at is actually a "vase".

Even if Xijiang is not one of the inscribed villages when it comes down to it, this should still be on your China itinerary. If you can combine it with an inscribed one nearby, and learning from the Dong villages that the "good looking one" is out but the traditional "boring" one is in, then I would suggest doing both for the Miao as well. Xijiang for the thrill, <insert inscribed village> for the WHS visit.