Dana Biosphere Reserve is part of the Tentative list of Jordan in order to qualify for inclusion in the World Heritage List.

Dana Biosphere Reserve is located in a landscape of mountains and wadis. It protects rare mammal species such as the Nubian ibex, sand cat and the Syrian wolf. It is also an Important Bird Area. Of archaeological interest are the ancient copper mines in Wadi Feinan. 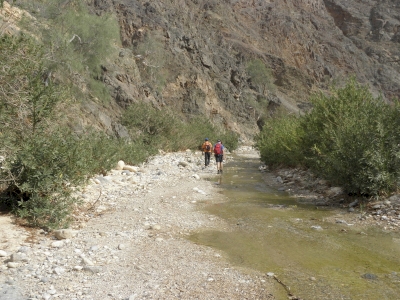 It has become a good tradition to go out into nature for a few days on every trip. In Jordan, I chose the Dana Nature Reserve for that purpose. I stayed for 2 nights in the Feynan Ecolodge, the flagship accommodation of Jordan's Royal Society for the Conservation of Nature in Dana Reserve. It is reached by 4WD only, so a local Bedouin driver will come and pick you up from the main road. That 20 minute approach alone is worthwhile for its view on the rock formations, especially in the late afternoon light.

The lodge runs entirely on solar energy, which means that there is only limited electricity at night. The lodge also provides employment opportunities by hiring jeep drivers and guides locally, and candles and bread are also made on site. 75 local families benefit from its business.

On the morning after my arrival, I joined a half day hike organized by the lodge. Together with a Belgian couple I walked to and through the Wadi Ghwayr. Our guide Ali hailed from the local village, Feynan. He first showed us the village: the summer and winter camps of the Bedouins, the mosque and the school. He himself lived in a house nowadays, but his mother who we also met still lived in the traditional way.

In the village center there are two large open spaces, one of which is a large football field, made of sand and slightly sloping. The other area is used for weddings which usually last three days. Ali himself got married here last year, and said that 1,500 people came. He received 25 goats and 3000 dinars as a gift, so it was quite profitable.

After “the center” we turned left and walked uphill. In ancient times there were copper mines here, the remains of which can still be seen - both the mines and the waste heaps that were caused by it. Mining is also the reason why there are hardly any trees in the area: the wood was burned to melt the copper.

On the other side of the hill we ended up in the Wadi Ghwayr. This is a river bed that only holds a significant water in winter. The first part is very wide and was now completely dry. We followed the river further until it narrowed and ran like a gorge between the mountains. It held a little bit of water, but it was still walkeable.

This was a nice and flat walk along the river. Our guide frequently stopped to tell us about the plants  that we encountered. There are fake melons that are only eaten by donkeys. Other plants have medicinal powers or are used as soap. The only color in the landscape we saw was the pink of the blooming oleanders. There were more birds here than I had seen all over Jordan so far. And we found a trace of a big feline, probably a hyena. They hunt the Bedouin sheep and goats here at night.

When we couldn't go any further through the wadi, we stopped for tea. Ali had brought a kettle and tea glasses and brew traditional tea for us with sage and lots of sugar. He told a few strong stories / local legends, and we were visited by 2 more Dutch people who dropped by for tea.

After tea we walked mostly the same route back along the river. At the end of the wadi a jeep was waiting for us to take us back to the lodge, saving us the half an hour walk through the village.

I would have liked to hike a little longer, but the lodge did not have longer tours on offer that day. At the end of the afternoon I therefore joined another short walk: the sunset walk. It took about an hour and a half and went along a ridge above the village. Here you can of course see the sunset beautifully.