The ancient town of Nicopolis ad Istrum is part of the Tentative list of Bulgaria in order to qualify for inclusion in the World Heritage List.

The ancient town of Nicopolis ad Istrum is a former Roman and Byzantine city dating from the 2nd century. Nicopolis was founded by Emperor Trajan in memory of his victory over the local Dacians. It had a classical street network, a forum, thermae, a basilica. After being destroyed by the Huns in 447, the town got rebuilt and became an episcopal centre during the early Byzantine period.

Map of The ancient town of Nicopolis ad Istrum 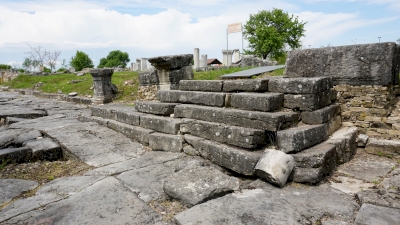 For true history enthusiasts it is necessary to see directly the grandiose achievement of the one known as one of the parents of the Romanian nation.
For Trajan himself, the conqueror of Dacia, founded the city after the epoch-victory, for the Dacians had given him more dictatorship than other peoples with tendencies to indwell.
Thus, Nicopolis ad Istrum ("Victoria from the Danube"), the white city of hard stone, at that time - almost two millennia ago, was one of the most advanced.
There are elements of novelty in the Empire: agora warmed underneath - because the winters were somewhat cooler than in Rome, the canal built in the semicircle below the main boulevards, the theater with a capacity of about 400 seats had shops left and right.
It is near a drilled water source, but also near the Rositsa River, on the road between Serdica (Sofia) and Odessos (Varna) and further on to Bizantium. The relatively straight plate gives the possibility to easily watch distances, but at that time there was no longer fearful opponents - the Carpathian-Danubian-Pontic space now offering sufficient protection, no defense walls.
They intervened much later, only when the avars attacks began. Maybe his conquest and final abandonment, in the 600s, kept him so well that now, although only about a third of the whole , looks sensational.
The square is quite extensive, the temples are monumental, with the support columns about 15 meters.
The stables are projected perpendicularly to the two large avenues, which stretch one on the north and the other at the western width.
It is still in the research stage, on the spot archaeologists discover with delicate brushes the innards of Roman dwellings.
It is also important because the Christian missionary Wulfilla invented here the Gothic alphabet, translating the Bible to be revealed to the speaking peoples only.