Two neolithic dwellings with their interior and household furnishings and utensils completely preserved. is part of the Tentative list of Bulgaria in order to qualify for inclusion in the World Heritage List.

The Two Neolithic dwellings are located next to each other in Stara Zagora. The two date from the 6th millennium BC and count among the oldest surviving houses in the world. Together with their furnishings and utensils they are protected together in situ, covered by a museum building. 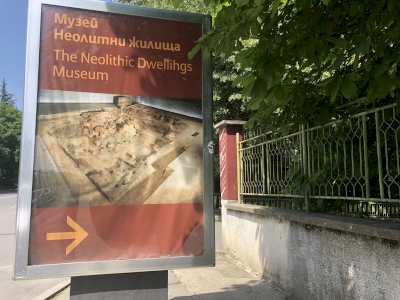 Two days ago I visited this TWHS with the funny long name: Two neolithic dwellings with their interior and household furnishings and utensils completely preserved. The remains of the two adjacent dwellings lie in a museum building in the center of the town of Stara Zagora. Downstairs there is a collection of neolithic ceramics, mostly taken from other sites around Bulgaria. As the site is already well described by previous reviewers, I'll focus on the Practicalities.

Getting there by car
Although the museum is officially registered at ul. General Stoletov, the entrance to the parking lies at ul. Armeyska. It is signposted from the road with the sign attached to this review. You'll end up between university and hospital buildings and apartment blocks: the museum is enclosed by them. I could not find the entrance at my first try and the streets of Stara Zagora are quite busy with traffic, so there was no opportunity to look around slowly. Instead I parked at the large shopping center with Billa supermarket and Jysk furniture store at Bulevard Tsar Simeon Veliki. From there it is a 5 minute walk.

Entrance
The entrance fee is 5 Lev (2.5 EUR). Photography is forbidden. There is a guard on duty and a receptionist. There isn't much of explanation, only one map of the dwellings which indicates with colours what is left where. The houses had two storeys and parts of the contents of the collapsed second floor can be found between the ground floor remains.

Where next?
A visit to the museum will take only about half an hour. In the outskirts of Stara Zagora this enormous Brutalist sculpture can be admired: the Defenders of Stara Zagora Memorial Complex. 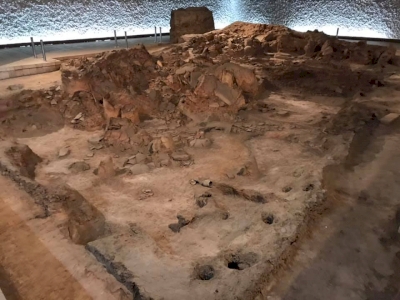 There are many remains of Neolithic sites in Eastern Bulgaria, but this one in Stara Zagora is worth to be inscribed because it is so well preserved that even knowing nothing about what are you looking at, you can imagine how people used to live, let’s say, 8000 years ago. We know nothing about the origin of these people, we know nothing about their ethnicity, we do not know how they looked like, but in this small museum we learn a lot about their everyday life, about their homes, furniture and utensils, food preparation etc.

The site is so well preserved because it was burnt, ‘baked’, like in the firing process of making ceramics – and those who lived there left everything behind. Then the sand covered the remains, few layers of sand, and it helped to protect the structure of the houses and what was inside. Till 1970’s when there were some construction works on the premises of Medicine Institute. And now we can see – as it is stated in the brochure about these two Neolithic houses – ruins of the two of the oldest surviving home buildings in the world. Around them the Neolithic Dwelling Museum was built and opened in 1979. On the ground floor of the museum we can see these two lodgings of different size, almost rectangular, consisting one room each, and a shared common place around them; they were located on the axis directed north-south; the entrance to the bigger one was facing south, while the smaller one was on the eastern side of the compound. The ceramic vessels are scattered all around in both and some of them indicate internal altars, containers for food storing, and also some stone grinders, ovens (placed closed to the northern walls of rooms) and pit can be clearly recognizable. In the basement there’s an exposition of stone and bone tools, ceramic and stone vessels and figurines, and some ornaments found in here and other Neolithic sites in the area.

It is forbidden to take pictures inside the museum, but when we showed up at 9 o’clock in the morning when the museum should open there was only a guard who asked us to wait for the museum’s workers. But after 15 minutes no one came, so the guard let us in and, seeing my camera, he said that we could take pictures before they arrive. And they did arrive around 10, so we had 45 minutes to explore the site and the museum exhibitions; in total we spent there one hour and that was enough time.

I visited the site in 2009. The region has been populated since the end of the 7th millenium when the hunters - gatherers settled down. A fire burnt the wooden walls of the two dwelling but "baked"(preserved perfectly) the clay foundations. I saw the walls, an oven, stone grinders, a clay bed, ritual stones ... The duplex is enclosed in a special museum which exhibits lovely ceramic from the neolithic and chalcolithic eras in the adjacent rooms.The experience is amazing, showing how sophisticated people were 8 000 years ago! The site and the whole region is long overdue to be included into the WHS list!

Also the new Regional museum of History in Stara Zagora is an architectural marvel, built above an ancient Roman street!The city is 2.5 hours drive from Sofia.