Nasca Aqueducts is part of the Tentative list of Peru in order to qualify for inclusion in the World Heritage List.

Nasca Aqueducts is a network of underground aqueducts built by the Nazca people to carry and use the intermittent water sources of the Andes in the dry desert of the region. This was made possible by the development of several technical innovations, including reservoirs, a filtration system, and above all helical openings to equalise the pressure between the inside and outside of the pipe and thus ensure a constant flow in the pipe. This hydraulic system was built in one of the driest deserts on the planet and represents an exceptional adaptation to these difficult conditions, allowing at the same time the colonisation of these territories and the practice of agriculture. 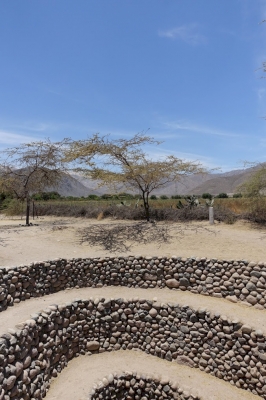 Part of the appeal of the Nasca Lines, is the fact that they seem so out of place. Clearly, the people who created them had knowledge and skill. But why would they settle in the middle of the desert in the first place? From the bus window all I saw was sand. The Nasca Aqueducts help to explain a little how they survived here: They set up an elaborate water management system enabling to conduct agriculture.

As usual with tentative sites it's pretty hard to say what the final scope of the inscription will be. I would assume the Cantalloc Aqueducts in town are part of the site, but who knows?

As stated year's back in my original review, I feel this should be part of the Nasca WHS itself. As an extension to illuminate the Nasca culture more I would be fully in favour of including some settlements as well as water management sites. As a separate site, though, this would feel redundant.

It's a simple walk from the town center to the Cantalloc Aqueduct. However, Lonely Planet claimed the neighbourhood was dangerous. Not sure about that. From the aqueduct you can also reach the lines at Telar and the old settlement at Los Paredones.

Nasca itself is connected by bus to both Lima and Arequipa (more details in my Nasca review). Next major town is Ica.

Obviously, if have made it to Nasca, you came to see the Nasca Lines. Around Pisco and Ica are the Pisco sites (T). On the coast you find plenty of Guano Islands (T), most famously the Islas Ballestas. And there seem to be some Paleontological Sites (T).