The Malabadi Bridge is part of the Tentative list of Turkey in order to qualify for inclusion in the World Heritage List.

The Malabadi Bridge is a 12th century arch bridge from the Artuqids Dynasty. Its main, pointed arch spans over 40 meters. It is decorated with human, sun and lion bas reliefs. The spandrels of the main arch incorporate small rooms for staff and travellers.

Map of The Malabadi Bridge 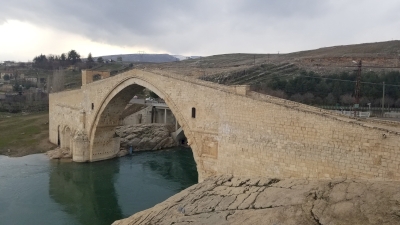 Turkey and its bridges... I think it's because of the already inscribed WH bridges that it thinks they should be worthy too. Well, it's a nice bridge from this angle but very ugly from the other due to the new bridge crossing the river, because once cars appeared it was clear the steps wouldn't work out for crossing. You can still walk over it and it's a sturdy, solid bridge.

The rooms used for "rest" are nowadays smelly and trashed so do yourself a favor and don't descent the narrow passages. After walking over and back you'll have seen everything. The highlight are a side shot that hides the ugly new bridge behind and you should be able to find a cat to pose for you too. 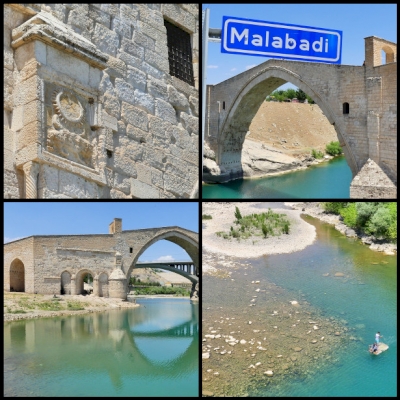 I visited this tWHS in Spring 2021 en route from Diyarbakir to Van lake. The arch bridge was built during the Artuqid period in 1146-1155 over the Batman river near the town of Silvan.

It was once the only bridge across the Batman river in this area, and was in continuous use until the 1950s, however in the 1950s a new road bridge was opened which is a real eyesore just behind the old bridge, together with a huge dam, beneath which some local boys were fishing with fishing nets from a small raft. The bridge is the longest spanned stone arch bridge in the world with its pointed arch of 40.86 metres over the deepest part of the river. The total length of the bridge is 281.67 metres, it is 7.15 metres wide. and has a height of 24.50 metres. It also has five arches with the main arch at the middle and there are two carved figures on the western support, one standing and one sitting. It is a very neat bridge but I don't think it's one of Turkey's best (especially since there is the much more impressive one near the Hevsel Gardens), let alone WH material. It was simply a pleasant picnic stopover point between Diyarbakir and Ahlat.