Rijal Almaa Heritage Village in Assir Region is part of the Tentative list of Saudi Arabia in order to qualify for inclusion in the World Heritage List.

Rijal Almaa is a traditional village that was founded in the 8th century. It was an important regional commerical center. The town includes 60 old tower-houses made of stone and clay. 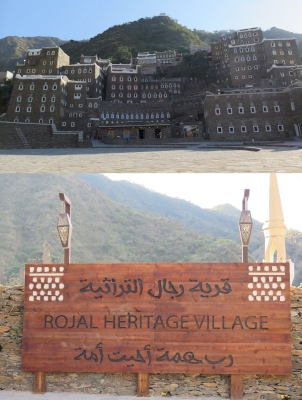 As I was starting to review I noticed the tentative site already has two thumbs up, but I didn't really think it's worth seeing so I took a bit longer to think about if I'm wrong about it, re-read the document and in the end - one big problem with it that stops me from recommending it.

So first off, Rijal (Rojal) Almaa has a rich history. A natural trade center between many destinations settled right here in the mountains. Second, military reasons with a long list of armies stationed here, what battles were fought, not my kind of thing but ok so it's historically important. However, that's still not what made me dislike it.

When you arrive at the village the first thing you will notice is how clean everything is, how museum-like the setup is. It's all "too" perfect. I have this strong feeling that, welp, it's been rebuilt? Restored too well? There is no way this village is ancient in the state it is now. Plus they ARE some modern houses thrown into the mix here and there, you can easily spot them in my picture at the back row. Have you ever visited a mine and they put these puppets or wooden mannequins around, well I was sort of expecting that for a real theme park experience but I got spared that.

My next though? Hang on, did I get the wrong village? Nope... a search online gave me the same pictures, and even worse, tacky light shows that make any Chinatowns look mild in comparison. As if I needed to be won over but I guess some visitors get a kick out of it.

How about some positives though. The building structures are unique, not that unique but a small niche that is probably enough to get it inscribed, because I don't feel there is much authenticity left. Second, it's a nice visit! Yes, it really is. You can walk around the buildings, up and down the steps, many buildings are open to visit and it's more or less an open air museum, and it's in an area of the Kingdom where you get more greenery, fresh air - not a drive through the desert for 5-6 hours until you spot another small settlement again. I came very early in the day and nobody was around thus the nice empty picture. After walking around for a bit the shops started to open even though I was the only visitor for the entire hour I spent in the village. Lastly, it's photogenic. I took many pictures trying to hide the ugly ones in the back and every angle is interesting, with the mountains in the background and a large valley beyond it.