Amazonia Theaters is part of the Tentative list of Brazil in order to qualify for inclusion in the World Heritage List.

The Amazonia Theaters comprise the Teatro Amazonas in Manaus and the Teatro da Paz in Belem. They were built during the Amazon Rubber Boom of the late 19th century. Large and luxurious, these theaters represent “the desire of local society at that time to align with European standards”. 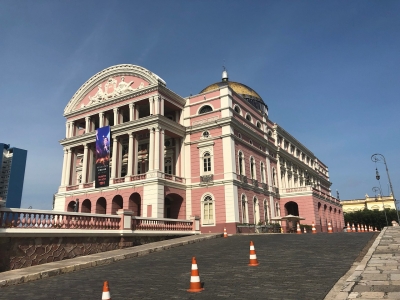 In August 2018, I visited Manaus, the capital of the Brazilian state of Amazonas. In the late nineteenth century, when fortunes were being made during Brazil’s rubber boom, the Teatro Amazonas was constructed in Manaus, according to legend to attract Enrico Caruso to the middle of the world’s largest rainforest (although it’s doubtful that the great tenor performed there). Nonetheless, Werner Herzog opens his best movie, Fitzcarraldo, with the title character paddling to the opera house to hear Caruso.  I endured an hour of modern dance, all the while thinking “please end,” to see the interior of the opera house, underneath its trompe-l'œil ceiling that is meant to evoke the view from beneath the Eiffel Tower. It was worth suffering the nearly hourlong performance to see the interior, especially since by waiting until the end and for all the other patrons to depart, I was able to take unobstructed photos.