Zagorochoria - North Pindos National Park is a mountain region in north-western Greece near the Albanian border. Most of the villages were founded in the 15th century and are examples of vernacular stone architecture adapted to the conditions of a mountain region. The natural environment, especially North Pindos, is characterized by steep gorges and dense forests, including areas with ancient beech forests. Pindus National Park is also home to rare and endangered animal species, including a population of brown bears. 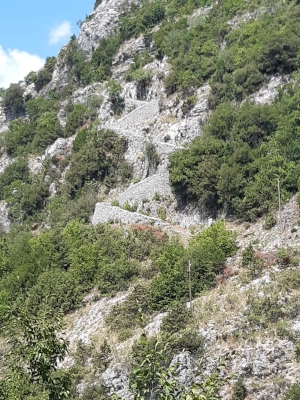 Villages - From the 46 villages we only saw 7, but after a while they all tend to look the same. All of them are built of dark stone with no ornaments. The most picturesque ones were Kato Vitsa, Tsepalovo and Macro Papingo.

Hiking trails - Easy and recommendable hiking trails are the walk along the Voidomatis river starting after Aristi and the popular Papingo rock pools. A very different trail starts at the monastery of Paraskevi in Monodendri. It leads to a cave shelter historically used by the monks. The trail is narrowly located at the edge of the mountain next to a steep abyss. It is not well posted and when we were there I was the only one walking it, which was a special experience.

Museums - We tried to visit the museums in Kipi, Kapesovo and Monodendri, but they were all closed during high season.

Bridges - We visited three bridges next to Kipi. They are all very easy to reach and there are several more in the area. 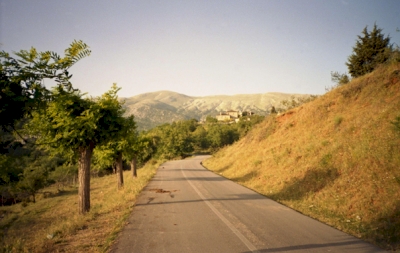 I visited this magical corner of Greece in early summer of 2006. After arrival to Thessaloniki by plane from Prague, we went to Ioannina by bus with one change in Kozani. The bus trip was quite lengthy but it was immediately clear and at the same time enchanting that we enter very different part of Greece as compared to touristy coast and islands. Ioannina is the best basement for trips to Pindus Mountains close to the border with Albania, and we stayed in the camp by the Ioanina Lake for a couple of days. On the opposite side of the lake, we could see the mountains, where Zagorochoria starts. The name is of Slavonic origin and thus understandable even for us, Czechs: Zagori = the place behind the mountains, and being by the lake we actually were just on the opposite side.

To reach the area and enter the place behind the mountain, we took an early morning bus to the mountain-village of Monodendri, which is the usual starting point for tourists who want to explore the Vicos-Aoos gorge the main attraction of the area. The gorge and mountains are wonderful there but I would say that the potential OUV of this site is rather the interaction of the Slavonic immigrants from the North with remote mountains that isolated and protected them from the majority population.

From Monodendri, we first went to Paraskieva monastery located on the edge of the canyon. The place was deserted early in the morning, thus, we quickly descend to the gorge. Unfortunately, the friend of mine injured his leg that meant spending in Zagori only two/three days that is much shorter than we had planned. It was not enough to fully understand the potential OUV of Zagori.

The upper parts of the canyon were very rocky and totally dry, and we lost our way a little bit. After overnight in a tent, we found our way and continued to Papingo village, so we missed the Vicos village with its bridge. However, we spot the huge spring that turned the completely dry canyon to the wild river with almost painfully cold water contrasting with hot summer weather. Mikro and Megalo Papingo villages are located on the slopes of huge rocky mountain that was very picturesque. The houses there are made from stone and they are built in quite uniform style. The second night we overnight just in the outskirts of the village, where we saw wild horses, friendly homeless dogs, turtles running over the roads, scorpions beneath the stones, huge fireflies in the evening, and other slightly fantastic things and creatures. I felt like in Carpathians and Balkan, indeed, rather than in the stereotyped Greece.

Next day in the morning, we went by bus back to Ioannina, and we could see one of the famous bridges at least through the bus window.

After recovery in Ionnina, we traveled further to the South in direction to Meteora and Olympus Mountains. However, we did a short stop to overnight in hotel in Metsovo that is mountainous town located still in Pindus Mountains but already outside Zagorachoria, although it name also sounded Slavonic to Czech ears, because it was inhabited by Aromanian (Vlach) minority. Metsovon was surprisingly touristy place but visited only by local tourists. It is built in quite distinct architectonic style with half-timber houses.

Well, I spent too short time in Zagori reagion, and I promised myself to return one day and explore this interesting area a bit longer and more intensively. 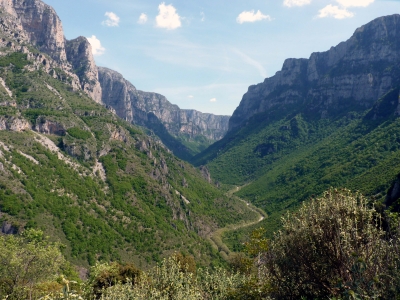