al Dimaniyyat Islands Nature Reserve is part of the Tentative list of Oman in order to qualify for inclusion in the World Heritage List. 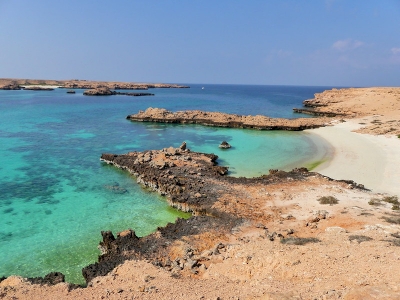 I visited this tentative WHS in December 2020. Nicknamed as Oman's secret Maldives spot, the Ad Dimaniyyat Islands Nature Reserve is made up of nine small islands and islets with a rich variety of healthy coral reefs, some of which are quite rare.

We booked ahead for a private tour with Blue Wave from 8am to 2pm for almost half the normal price inclusive of the 10 OMR nature reserve fee (possibly one of the only places in Oman where you're likely to need cash). Most probably rates were reduced since the companies had to rely solely on locals for their income. All the boats are practically brand new and in tip top shape with ridiculously high speed engines so you'll get to the islands in no time. Incredibly this snorkelling paradise spot is only around 70km away from Muscat and all the boats leave from the Al Mouj Marina where there also is a huge free parking lot.

The nature reserve is protected quite well with a network of ranger teams on site year round who are responsible for monitoring the turtle nesting beaches, conducting regular beach clean up activities and making sure that the recently increased fee of 24 EUR (10 OMR) for a maximum of 5 days is collected. Camping is allowed at designated areas so as to avoid disturbing the turtles, as is kayaking or diving. The turquoise blue waters around most of the islands are a haven for swimming, snorkelling and diving with turtles, eels, rays and dolphins (all year round) as well as whale sharks (migration season around September) and other whales. The best place to spot blue whales in Oman (quite rare but getting more frequent sightings since 2011) though is not here but rather in deeper waters around the other tentative WHS of Al Hallaniyat Islands. The white sandy beaches with an almost totally barren landscape except for some green patches of marine flora here and there resemble some of the Galapagos islands like Santa Fe and similarly they are a magnet for migratory and indigenous birds such as cormorants, ospreys, kestrels, gulls, terns, etc.

Even though these islands really are a special place I think it would be very hard for them to achieve inscription on the WH list on their own. Perhaps they would stand a better chance if they were to be grouped with Ras Al Jinz/Ras Al Hadd and Al Hallaniyat Islands as turtle nesting grounds, unique marine biodiversity spots in the Arab states, and a haven for cetaceans. 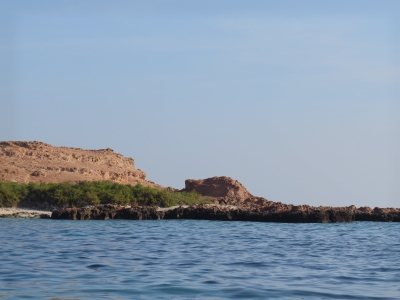 One would think the WHS status hurts the islands more than the current status. It already national protection and the boat captains follow strict guidelines to what they say helps them protect “their” islands. With the world heritage status the tourism could be more limited and reduce the income for the local community.

Arriving early morning at the docks with a warm sun for winter, many people were waiting for the tour to start. Each boat was limited to around 14 people. I was on a boat going scuba diving that only had 6 guests in total but had slots for a couple more. The trip from Muscat is around 45min. Once at the dive site I saw nice corals and turtles, nothing special but very healthy for having a busy port nearby. Usually I would say 1 dive is enough but after relaxing at the beach on another island which is nice but nothing to rave about we dipped into the same area again to just browse around in shallow waters which felt almost like snorkelling. Overall I think this is one of the nicer places in Oman but not in the world and can't justify it's OUV. The marine life surely isn't, and whereas the osprey nests were nice that bird species isn't rare. Perhaps some of the other birds that come in other months are.