Hall in Tyrol - The Mint

Hall in Tyrol - The Mint is part of the Tentative list of Austria in order to qualify for inclusion in the World Heritage List.

Hall in Tyrol is a town in the Inn valley about 10 kilometres east of Innsbruck, which gained its wealth from salt production. Its importance as a trading centre in the Middle Ages is illustrated by the rich architecture in the historic old town. In the 16th century, Hall was the first mint to produce coins using an automated process, the innovative roller press-coinage.

Map of Hall in Tyrol - The Mint 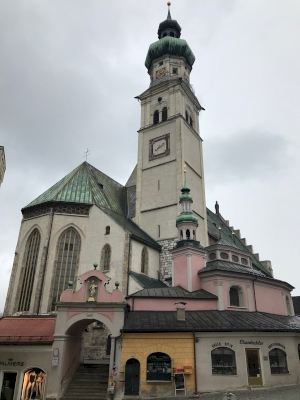 I visited this town in May 2019 and found it attractive despite terribly bad weather: a mid size, completely intact medival old town. Of the three large churches St. Nicolaus is the most impressive also  with the two neighbouring chapels, the baroque St. Josef and the older St. Magdalena. The latter has nice frescoes and is the only not baroquified church in town. Hall’s OUV potential lies nonetheless  not in its homogenous historic center but in its mint which claims to be the first industrial mint worldwide and the first that coined the first silver coin that equaled in value the then common Gulden that was made of gold.  Gold had to be imported from far away and the rich silver mine in nearby Schwaz made big and highly pure silver coins possible.  The mint is situated in the Hasegg castle which features a very cool octagonal tower.  There are no original features of this first industrial mint left but there is an excellent museum with a good audio guide worth an hour or two.  I had recently visited the old mint in Segovia (see my review of Segovia) and they took their expertise and there professionals from Hall.  While the machines in Segovia are probably also reconstructed you get there much better idea how they used water power for the minting  and how the whole production process worked.  Nonetheless Hall has the advantage of being the first of its type.  The nomination claims that the term dollar is based on the silver coin from Hall.  In truth it is based on a similar coin produced a bit later in Joachimsthal, today Jachymov in the  Czech Republic which is interesting enough now a part of the tentative site Montanregion Erzgebirge.  It may be a stretch but perhaps a joint nomination with Jachymov would make more sense to justify the above claim. In addition I think that a nomination of Hall and it’s mint  would make more sense in combination with Schwaz and its silver mine. It was called the “mother of all mines” and was in the 15th and 16th century the largest mining area of Europe and even the largest city in the Habsburg Empire after Vienna!

Also Schwarz has a well preserved center but smaller then Hall and less homogenous. Most impressive is its big Gothic church that was financed by the mining.  You can visit the mine which includes a rather adventurous ride on a little train into the mountain for almost 1 km.  There is also a very impressive water wheel but it is reconstructed.  Supposedly the Nazis constructed even a plane far back in the mine and planned to fly out of the mountain which seems highly difficult considering the size of the galleries.  If you like mines this is a nice visit but there is no obvious OUV visible.  There is also a strong connection to Augsburg since the mine belong to the Fugger family and was the base for their incredible wealth.

Hall was clearly a very important place in its time and opens up a whole web of connections to other interesting places. Perhaps a joint application with some of the mentioned places could create enough OUV for a success.

While you are there: the nearby church for Carlo Borromeo in Volders is special from the outside and from the inside. Schloss Tratzberg near Jenbach has fantastic furniture and wood panelling from the gothic period. 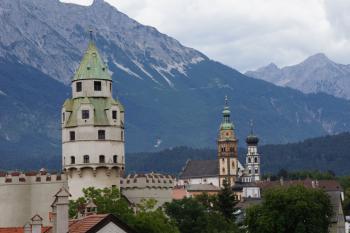 On the Tentative list since 1994 as "Old part of Hall in Tirol", the name was changed in 2013 and the new nomination places more emphasis on the mint and the role of Hall in the history of coinage. The nomination includes the old town of Hall and the Hasegg Castle, the location of the historic mint.

At the end of the 15th century, the first high-quality silver coin, the Thaler, was coined in Hall and in the 16th century, the roller coining machine was developed, enabling for the first time an automated mass production of coins. Today, the Hasegg Castle houses a mint museum in the rooms of the historic mint. The museum exhibits a collection of coins and several historic coining presses, including a reconstruction of the first roller coining machine. It's really a huge machine, about 8 metres long and 5 metres wide, and a complex mechanism with many gear-wheels and a waterwheel for the power supply. But usually moveable museum objects can not be part of a WHS and the castle has no structural elements that are specifically connected to coinage, it is just an ordinary castle. The most striking part is the Mint Tower ("Münzerturm"), actually the watchtower of the castle and today the landmark of the town (photo). The tower looks quite unusual: an upper part with a polygonal shape and a round base. From the top you have a nice panoramic view of the old town with the towers of three churches and the Karwendel range in the background.

Close to the castle is the historic town centre, you just have to cross the street. The name 'Hall' indicates that the town gained its wealth by salt mining. Pretty town houses from several periods - Gothic, Baroque, Renaissance - all well preserved, but Hall is not outstanding compared to other medieval cities in Central Europe.

Certainly, Hall is a lovely old town and has also some historical significance. But the OUV of the site is primarily attributed to the historic mint and is visible mainly by the moveable collection of the museum. Moreover, the centrepiece of the museum, the first automated coining machine, is a reconstruction and thus lacks of authenticity. It will be interesting to see how ICOMOS and WHC deals with these issues.

Withdrawn by Austria, after "Rejection" advice by ICOMOS