QUMRAN: Caves and Monastery of the Dead Sea Scrolls

QUMRAN: Caves and Monastery of the Dead Sea Scrolls is part of the Tentative list of Palestine in order to qualify for inclusion in the World Heritage List.

Map of QUMRAN: Caves and Monastery of the Dead Sea Scrolls 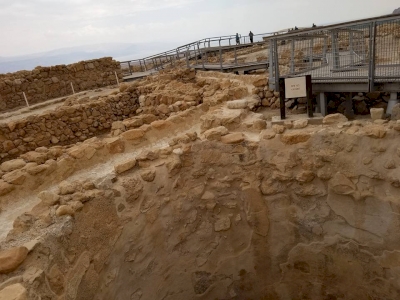 The Dead Sea Scrolls are indeed one of the great written archaeological finds of the past century. I visited the Shrine of the Book in the Israel Museum where reproductions of these ancient scripts are accessible for the public to visit and where many of the original finds are actually stored. This review, however, is not about the scrolls, but the place where they were originally found, Qumran. Qumran today is another ruin in Israel's national park system, but there are a few very interesting things to note about it. First of all, Qumran is actually within the 1949 UN-recognized boundaries of Palestine, but as implied earlier, in territory completely controlled by Israel at present. It is located along the main road by the Dead Sea, which causes it to fall under the itinerary of most tourists on a Masada and Dead Sea day trip from Jerusalem, and we were no exception to that. Just as we visited most places in Holy Land, my family and I visited Qumran with our own vehicle and guide. As much as Qumran is advertised as the site of the Dead Sea Scrolls, one wouldn't know that simply by looking at the site, and as such, that (over-hyped) significance of the find should not sway our opinions of the site. To be honest, the ruins didn't look too impressive at first glance, and I think everyone who visits is just waiting to get to the view of the legendary caves. I think that this is a stupid practice; while Qumran doesn't impress in its majesty, I think we're all failing to appreciate the true uniqueness of the site. This site was used by the Essenes for 2 significant purposes: to worship, and to survive in the harsh desert. Therefore, Qumran is structurally unlike any other ruin one would see around the Holy Land. It has the most sophisticated water management and distribution system that I saw in any of the ancient ruins I visited. While perhaps that of Masada and Megiddo may come to mind, Qumran is distinct in just how extensive a theme the water system is throughout the site. Almost every structure I see is some form of transportation (aqueducts), storage (cisterns), or use of water. What was all that water used for? You see, the Essenes were quite fond of their ritual baths. As a religious organization in isolation in the desert, they must've treasured water so much, and it shows. Other rooms, like the pantry and the scriptorium are present, all with a defined purpose in worship or survival. The site is a perfect demonstration of the life of the Essenes, and shows how they became responsible for the work that brought the site attention in the first place. Qumran truly has no parallel in the world, and its scrolls don't define it, but simply add to the greatness of the site as its lasting legacy to the world. 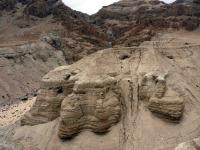 It seems rather strange to be reviewing a Palestinian Tentative List site when we visited it as an Israeli National Park using our Israeli 2 week “multi visit” pass! The answer lies in the fact that, whilst it may be within “Palestine” as recognized by the Oslo Accords, Qumran is still under full Israeli control.

The site of course has “World-wide” fame as the location where the Dead Sea Scrolls were found. We hadn’t expected that there would be much to see but found the visit of interest in providing background into the “Essenes” – an ascetic sect from around the 2nd century BCE who wrote the scrolls. The site consists primarily of their excavated communal living quarters (Ritual baths, refectory, scriptorium etc) with distant views of caves in the hillside and in the nearby eroded Wadi (photo) – including the original “Scrolls Cave”. There is also a small museum and a dramatized audio visual presentation which portrays their life, beliefs and practices. The site gets busy with coach trips ex Jeuralem for whom it is yet another stop on their Dead Sea/Masada expeience. Without our prepaid pass we might have passed it by given its cost of 29NIS (6.1 Euro) for a pretty short visit - 45 minutes unless you go for a hike towards the hills (these were closed when we were there because of fears of flash floods). On reflection that would have been a mistake and I am glad we have a personal “vision” of this famous location.

QUMRAN: Caves and Monastery of the Dead Sea Scrolls (T)