Valle Salado de Añana is part of the Tentative list of Spain in order to qualify for inclusion in the World Heritage List.

Valle Salado de Añana is a cultural landscape of traditional salt works in the southwest of the Basque Autonomous Community. The salt works produce salt from natural springs using a network of man-made channels, terraces and evaporation pans built with local materials such as stone, wood and clay. Salt production in Añana dates back to the Neolithic period and the antiquity and continued uninterrupted until the 1960s. A significant proportion of the terraces were reconstructed in the early 2000s. 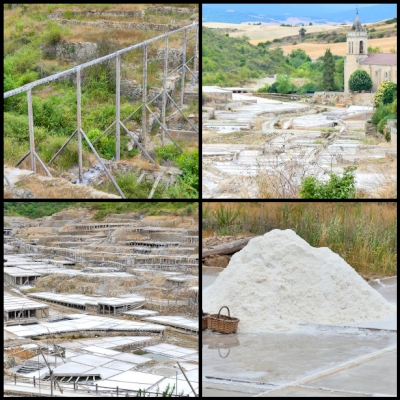 I visited this tentative WHS in July 2020 as a short detour from Miranda de Ebro in the Basque country. Even though salt production is already covered on the WH list by sites such as the ones in Salins-les-Bains and Arc-et-Senans in France, or Wieliczka and Bochnia Royal Salt Mines in Poland, the Valle Salado de Anana is still a very worthwhile stopover if you're in the area, even if it never makes it on the WH list. It also reminded me of a recent visit to Maras, in the Sacred Valley of the Incas, in Peru.

It is one of the oldest salt production facilities in the world and the 'white gold' is believed to have been uninterruptedly produced here for around 7,000 years. It consists of hundreds if not thousands of salt pans, wooden platforms, springs, channels, wells and storage facilities. The Salt Valley of Salinas de Añana stands in what were once waters of a vast sea 200 million years ago. The old brine wells are inhabited by a unique crustacean named Artemia Parthenogenetica. The brine flows through the wooden channels and platforms and salt is obtained through solar evaporation. The salt is believed to be of supreme quality and is particularly praised by Michelin star chefs worldwide as having an intensity that lasts much more in the mouth. The saltwater springs contain 210 grams of salt per litre, seven times more than seawater! Moreover, there are three types of salt obtained here: mineral salt, flor de sal, and salt stalactites (gourmet). The latter form due to the leakage of brine in the salt pans, wooden structures and channels. There are several information or wellness tours on offer and everything is very well organised. 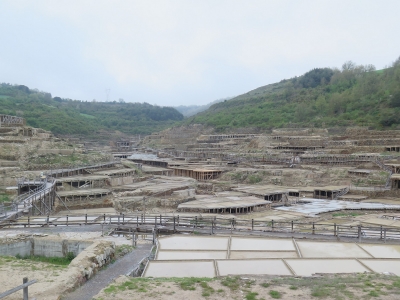 The Salt Valley of Añana is the ultimate stopover for salt pans in Iberia that has been around for 6,500 years and was really important during the Roman times. Ancient evaporation methods are still on display, and actually still in use for cultural heritage reason. One you can also see the flawed concrete method that would crack by the salt and is not maintained for budgetary reasons. Salt production used to be very profitable as can be seen in other mines around the world, but once salt was easy to retrieve from other methods the valley stopped manufacturing commercial salt.

A tour is available in a multitude of languages. Arriving at 9:45 when the shop opens I was the only person to have booked the English tour (and the only person to be around but a ton of people would arrive by the time I left and quite sure they were all Spaniards). There was no problem in being the only tourist to take the tour and it gave me such a better control of understanding the salt valley and asking questions as much as I want. Once the big wooden key was used to open the gate the tour would begin. The valley beyond the visitor center is not that big and one can explore quite a bit of it on the tour, as well as taste the extreme salt content in the water, get working on getting water flow going into your (temporary) pan to get an idea how much work it is shifting the water around, and in the end you can enjoy a foot/hand bath in salty water (they call it spa). There are areas you don't go to as explained on a nice map but they are just going to be the same as you can see in the immediate surroundings. The most interesting part about the tour was probably the water distribution system which had to be shared among all the panners (is that a word?) in scheduled time slots.

Not knowing the history for the attempts to inscribe it into a WHS, the staff was explaining they are working hard on getting it ready to attempt, and are proud to point out the Concours Europa Nostra aware from 2015. Añana is also trying to go for a twofer with Mining History of Spain. Nevertheless its inscription I still have fond memories of the visit as well as my guide Noelia. Also don't forget to take some great salt home from the gift shop.