Frontières de l'Empire romain : Limes du Sud tunisien is part of the Tentative list of Tunisia in order to qualify for inclusion in the World Heritage List.

The Roman Limes in southern Tunisia is represented by 6 sites. They comprise of a variety of military works adapted to the geographic conditions on the edge of the Sahara. They date from the part from the 2nd to the 5th century. 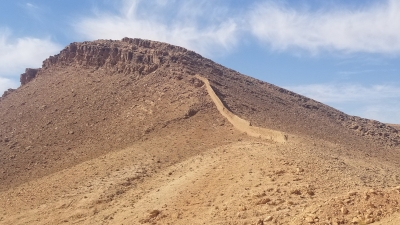 We all love more Limes sites. Did you know there was a Limes in Tunisia? Interesting, but not interesting to look at, basically like the rest of the Limes aside of some special section such as Hadrian's Wall. Also I find it hard to believe the Limes in the Sahara was anything useful at the time, but like the Great Wall of China (uhhh I dared to make THAT comparison) it was meant for watchtowers to signal any incoming attack and like thr Greal Wall (yes I said it) it didn't actually work to defend a frontal attack. It was meant to protect trade routes from sub-Saharan countries and ensure goods are taxed.

There are not many places in Tunisia reachable so I picked the Muraille de Jebel Tebaga. The road will lead you right through the pass and there is a military checkpoint just north of the location. The guys there had some chuckles that I wanted to go there but told me it's only 2 more minutes down the road. Blink and you will miss it but the good news is that you can find it on Google maps so you can sort of figure out when to look up the cliffs. You can also find a small dirt road going up a hill to a tower and park there, walking up the hill to the wall. There are more sections on the opposite side as pictured but climbing up there requires extra efforts and I don't think it's worth it.

The Limes Africanus (modern name) stretched from Mauritania to Tunisia but only for some sections. As you can see the Sahara is huge and building and protection such a long line would be crazy even for today, but with the Roman empire not wanting to spare so many troops it was just important trade routes. However, I don't believe Tunisia needs to stand alone with an inscription and if it goes like the European one I'm not too happy  Either find enough spots across the continent has to show the vastness of the Limes or don't inscribe at all.