Rocks of Belogradchik is part of the Tentative list of Bulgaria in order to qualify for inclusion in the World Heritage List.

The 230 million years old Rocks of Belogradchik comprise strangely shaped rock formations created by erosion. They vary in color and seem to resemble people, animals and different objects. The rocks are also connected to local legends.

Map of Rocks of Belogradchik 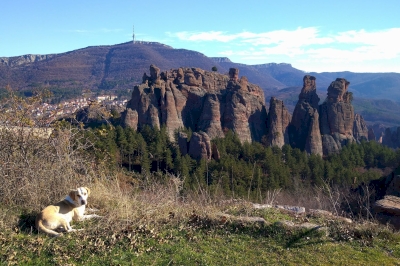 Before the conclusion of my second 3-month stay in Golden Sands, Bulgaria (and on the occasion of a Robert Wilson production of The Tempest by Shakespeare at the National Theater in Sofia), I decided to visit the 3 TWHSs in the north western corner of Bulgaria in mid-November 2021.

In fact, back in 2010, one year before the nomination of this site, I tried to get to Belogradchik but failed. My train from Sofia stopped at the nearest train station Oreshets, but with no bus or taxi in sight I didn't know how to move from the station to Belogradchik. So I got back on train and headed to Vidin and onto Felix Romuliana in Serbia.

This time I found one direct bus a day from Sofia's central bus station to Belogradchik. So it is not so difficult to get there. It departs at 16:30 and arrives at 20:00.

I explored the site in the following morning. The photos of the site that I had seen were stunning, and in actuality it was stunning!

This is due to the combination of the rocks and a fortress, and without either one of them it would not be so special. This shape of rocks is not so unusual in Europe, especially in Czechia. The fortress was originally built by the Romans in the 1st AD and later enlarged by Bulgarians and Turks, but the remaining fortress does not look so unusual.

There are many clusters of the rocks in the area of 50 squire km here, but the fortress was built at the foot of the highest cluster, and it incorporates and uses this cluster for defense purpose. You can indeed walk up to the top of one of the rocks. Although the site is called "Rocks of Belogradchik" and is submitted as a natural site, the description at the UNESCO webpage makes it clear that they want the fortress to be included and considered. But a fortress would be considered cultural.

I am not sure if this site would ever make it to the list, but whether or not it makes it, these awe-inspiring visuals should not to be missed!

Due to the morning sunlight from the back of the Rocks I couldn't take a very nice photo, and I contemplated on staying in Belogradchik for another night just to take a better photo in the afternoon. But I decided to ditch the idea because my reservation that night in Vratsa was non-changeable/cancellable. My plan for the afternoon was to visit the nearby Magura Cave TWHS and then take a train from the Dimovo train station to Vratsa to visit the Vratsa Karst Nature Reserve TWHS the next day.

If you have time, though, you can go hiking or by renting a mountain bike go biking on the prepared biking trails that go through several clusters. There were enough of accommodations and restaurants available even during this time of the pandemic.