Archaeological Site of Sagalassos is part of the Tentative list of Turkey in order to qualify for inclusion in the World Heritage List.

Sagalassos was a Roman / Hellenistic town, built on various terraces. It was a center of pottery production, which can be seen in the ruins of kilns and workshops. A recent finding was a colossal statue of the Emperor Hadrian, which is thought to have stood 4-5m in height.

Map of Archaeological Site of Sagalassos 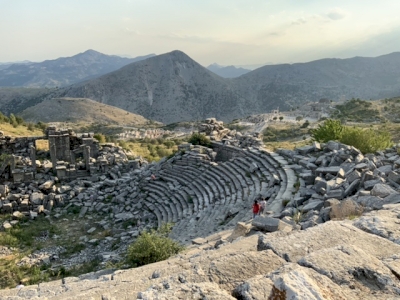 Sagalassos is situated in the Western Taurus mountains, about 120 km north of Antalya, in the Turkish province of Burdur (Ağlasun). The city is embedded in the Taurus Mountain chain, with the Mediterranean Sea to its south and the Anatolian plateau to its north, located in a mountainous terrain with forests, steep valleys and rivers.  We visited this tentative UNESCO site in July 2020 after it was reopened following the Corona crisis with the usual health precautions.  As it is about 1500 metres above sea-level the temperature was pleasant even in the middle of summer with a light cooling breeze.

It is an archaeological jewel that was blissfully forgotten over the centuries and therefore never really destroyed or looted by force.  A protective settlement first set up by the “Sea People” around 1200 BC, it played an important role in the region throughout the Bronze Age, Hellenistic (Seleucid and Pergamon) Roman and Byzantine periods, abandoned after an earthquake in the 7th century with little population left in the subsequent centuries.  Rediscovered only in the 19th century, excavated as of 1989 by Belgium’s Leuven Catholic University and partially restored given that large parts of the collapsed buildings remained on site.  It has the appeal of  Pompeii retrieved from the ground and of Ephesus with its glistening public buildings.  Surely a worthy candidate to be put on the world heritage list.

Sagalassos was conquered by Alexander the Great in 333 BC on his way to Persia.  After being taken into the Roman Empire in 25 BC the city flourished and is displaying the best examples of Imperial Roman architecture.  From the 5th century on, Christianity heavily influenced the architecture of Sagalassos.  It was linked to other centres of the Empire by a well functioning road network, and with the ports on the Aegean and on the Mediterranean coast.  It was one of the largest ceramic centres of its period; it produced the Terra Sigillata type, which was in demand all across the Mediterranean world.

When you enter the site (next to the parking lot - with toilets nearby and a small kiosk where you can buy refreshments - the ticket booth is open in summer 10 a.m. to 6 p.m., in winter 8:30 a.m. to 4:30 p.m. with the site itself open one more hour, entrance fee TL 14.- as of summer 2020) you can choose three walking tours ranging from 1.5, 2.5 km to 4 kilometres in length; you should estimate between 1.5 to 4 hours depending on the tour).  Take water with you, there is little shade and you will walk on some steep parts of the visitors path.

We had chosen the two hour tour which features all the main sites from the colonnaded street leading to the Hadrian and Antonius Pius temple and Alexander’s Hill, back to the Tiberian gate, the lower agora and a huge reconstructed Roman bath complex, and the Hadrianic Nymphaeum.  Staying on the 2 hour track we did not go to the stadium but turned up to a steep hill past some rock graves to a small Doric temple and a well preserved Heroon.  Along the upper end of the large state agora we reached the closed off Neon Library (ask for the keys at the ticket booth) with a large mosaic, and the well preserved Roman Theatre from where you have a great view across the city and the surrounding mountains and valleys.  We had chosen the highlight of Sagalassos for last: the Antonine Nymphaeum with its huge fountain complex stretching across the upper side of the state agora with statues, columns in coloured marble, monumental gates, a market for luxurious merchandise, and a fish pond.  The restoration of the Antonine Fountain, which was built in the reign of Marcus Aurelius, was completed in 2010.  Past an urban mansion with more than 80 rooms, and the City Council building we returned to the entrance.

At the time of writing an exhibition titled, “Once Upon a Time in the Taurus: Sagalassos,” was on display at Istanbul’s Yapı Kredi Cultural Center.