Historic centre of Pavia and Chartreuse

Historic centre of Pavia and Chartreuse has been part of the Tentative list of Italy.

The Historic centre of Pavia and Chartreuse consists of both the historic centre of Pavia, a city in northern Italy, plus the Chartreuse of Pavia to the north of the city. Once an important city, the 12th-century St. Michael's church in Pavia is considered to be the masterpiece of the Romanesque in Lombardy. The Chartreuse of Pavia is one of the two most important Carthusian monasteries in the world and one of the most renowned monuments of Renaissance art in Italy.

Map of Historic centre of Pavia and Chartreuse 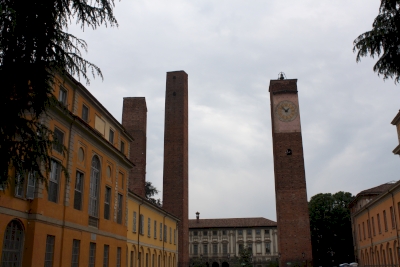 May 2016 - on our way to Tuscany we made a stop for lunchbreak in Pavia. Very nice Italian town with a picturesque core. But the Certosa was a bit off, so we did not take the chance to visit the church. There are so many Italian wonders, understandable that it has left the tentative list, at least for now. 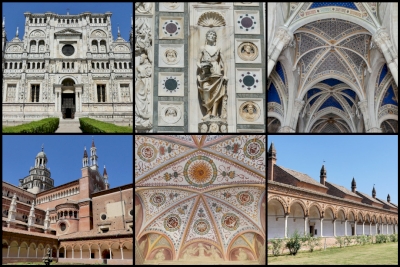 I visited this tentative WHS in July 2019 and mainly focused my visit on the Certosa. The monastery and complex is one of the biggest in Italy and 2nd most important Carthusian monastery after the one in Padua. Built in 1396-1495, it was once located on the border of a large hunting park belonging to the Visconti family of Milan, of which today only scattered parts remain (so no par force hunting landscape here left).

The Certosa is open everyday except Mondays all year round from 09:00 till 11:30 and from 14:30 till 16:30/18:00 depending on the season (always make sure to check out for holidays before visiting just in case). Incredibly enough for such a great site, it's completely free! Though the Carthusians in their early centuries were known for their seclusion and asceticism and the plainness of their architecture, the Certosa is renowned for the exuberance of its architecture, in both the Gothic and Renaissance styles, and for its collection of artworks which are particularly representative of the region. That said, the marble facade is more reminiscent of Tuscan monuments!

The small and large cloisters are accessible from the church and the red brick architecture and Verona marble angel figures adorning the arches are a sight to behold, both for the quality and detail as well as for the sheer size of the whole structure. By visiting the gift shop you might be able to meet some of the few friars who still live here and sample their variety of herbs and medicinal plants. An interesting trivia is that in August 1946 the illegally exhumed body of Benito Mussolini was discovered in the complex and two Franciscan friars were charged with assisting in the concealment of the body.

Keep your eyes peeled in the new Sacristy as it contains a vivid cycle of frescoes by the Sorri brothers, belonging to the late Sienese Mannerism. While visiting the complex, silence should be kept at all times, even though there wasn't anybody implementing the rule. Apparently photography is also not allowed, especially inside the church, but again luckily nobody was around when I visited (except in the gift shop). The church interior is top notch too and I must say that after the Scrovegni Chapel in Padua, this is certainly one of the best tentative sites on Italy's list.

Pavia is located conveniently close to Milan Linate airport, so I had planned a visit to this TWHS on my last day in the area. The city has played an important role in the Longobard expansion into Italy, but isn't part of the locations included in the 'Longobards in Italy WHS'. This omission seems to have been done on purpose, as Italian authorities will have bigger plans for this town in its own right. Plans that are not limited to its Longobard history.

There's the 14th century "Certosa di Pavia", one of the two most prominent Carthusian monasteries in the world. This monastery lies 8 km north of the city, and a combination visit with the city center of Pavia will set you back a few hours. As I was short on time and did not want to skip yet another Italian lunch, I decided to forego on the Certosa with its limited opening hours.

The city itself has enough to see and do for a couple of hours. Its main monuments are scattered around, so you need time to walk between them. I spent about 2,5 hours there, including eating an excellent pizza in the real Italian family style pizzeria Regisole near the Duomo (observing the Italian families interacting with the staff is a joy, and my pizza capriciosa tasted great as well). Most impressive sight in town is the St. Michele Church. It dates from the 11th/12th century, and has a facade to remember (see attached photo). The interior has various very old frescoes and religious objects such as the silver Teodote's Crucifix.

A sight like St. Michele Church or the Castello Visconteo would be a major feature in any city outside of Italy, but unfortunately this country has so much art & architecture on offer that I wonder if it ever will be put forward by Italy for inclusion.

Pavia has the second largest Carthusian monastery in Italy (the largest by the way is Padula which is already on the list). It isn't far from Milan to go by train. The monastery is lavishly decorated and is very impressive. Getting there from the railway station was a bit difficult though. It's a half an hour walk along the road and since it was winter and raining we had a rough start. Eventually it paid off big time!

Extended to include the town in the current TWHS (1995), originally only the Certosa