City Hall, Georgetown is part of the Tentative list of Guyana in order to qualify for inclusion in the World Heritage List.

The City Hall in Georgetown is an example of Gothic Revival architecture made out of timber and cast iron columns. It is thought to be one of the best examples of British Victorian design in the Caribbean. It was built in the 1880’s. It still houses the offices of the Mayor and the City Council. It also has a Concert Hall. 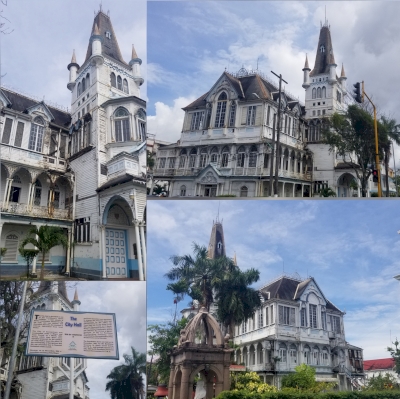 I will again briefly mention that Guyana is currently not very safe to visit. There isn't a war but plenty of criminals. In the area around a rather beautiful building you may get your phone or purse stolen so show no wealth as you walk around the blocks. "Welcome to City Hall" sounds inviting but the gates are locked. One gate in the back was open (I surely didn't enter the alley at the east side!) yet it felt wrong to just waltz inside to take closeup pictures. I also don't think it's really necessary. The building is falling apart, it doesn't look safe to visit inside, and I think the best part is visible from the road. Nice tower, an info pane (other buildings have that too), cute spiral staircase and totally "haunted house" written all over. Joke aside, I actually think this HAS some value and with an unwritten rule of "every country ought to have a WHS" this combined with the cathedral and maybe the nearby courthouse, others I probably missed or thought as too run down to be worthy, would make a good collection. I also find that it may not be up to par of Paramaribo but similar enough to let it squeeze past. Anyhow, lots of restoration work and proper protection is needed before all collapse. 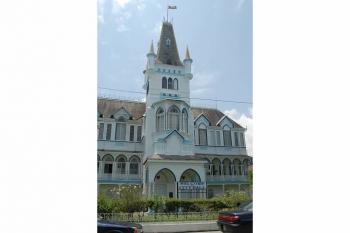 I visited Guyana in August 2007, when I spent a couple of nights at Cara Lodge, the only historic hotel in Georgetown (caralodge.com). Cara Lodge was constructed as Woodbine House in the 1840s and converted into a hotel in 1996. I spent an afternoon wandering around Georgetown (the hotel arranged for a former police officer to act as my guide), when I visited most of the capital's historic buildings, including St. George's Cathedral (one of the tallest wooden churches in the world), Georgetown City Hall (a nineteenth-century Gothic Revival building), Parliament Building and Stabroek Market, the Caribbean's most attractive market complex (especially after the Marché en Fer in Port-au-Prince was destroyed by the January 2010 earthquake, a few months after I visited the market in October 2009).