Iron Trail with Erzberg and the old town of Steyr

Iron Trail with Erzberg and the old town of Steyr is part of the Tentative list of Austria in order to qualify for inclusion in the World Heritage List.

The Iron Trail with Erzberg and the old town of Steyr represents 800 years of iron mining, smelting and trading since the Middle Ages. The Styrian Iron Trail is the region between the towns of Leoben and Hieflau in Styria. Key components are the Erzberg open pit mine with its distinctive pyramid shape and the town of Vordernberg where significant parts of the historic ironworks have been preserved. Due to its location at the confluence of two rivers, the Old town of Steyr was an important centre for iron processing and iron trading. 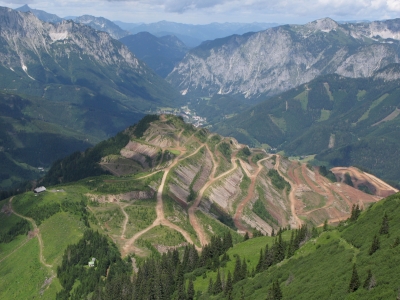 I visited Erzberg mine and nearby town of Eisenerz, one component of this serial TWHS, by coincidence in 2009, and I had no feeling that I have seen something that has a potential to be inscribed to the list. Actually, I was quite surprised when checking the TWHS list of Austria very recently that I found the site that I have visited!

The reason of my visit was just to have a short stay in Alps after my conference trip to Graz (quite nice WHS). I traveled with my colleagues by car, and they found quite reasonable accommodation with easy access to peaks of Styria Alps.

It happened that the evening of our arrival to Erzberg area was very hot with temperatures above 30deg. During night, temperature dropped by around 20 degrees and it was very cold with heavy raining. We postponed the trip to alpine mountains to the next day. Instead, we headed to the town of Eisenerz. It was rather small, with historical houses very similar to what I have seen in Graz. The most interesting part was the fortified church, but all these small historical towns and churches can be seen everywhere in the Central Europe. However, we noticed that the site bears quite important mining heritage. If I remember properly, it was possible to have a guided tour in the iron mines, but we refused.

Next day, the weather was just suited for climbing uphill, and we did so. During the tour, I noticed the mine from above (PHOTO). The “consumed” mountain looked quite interesting, but the problem is that historical mines of Central Europe are already over-represented on the list. For example, Goslar is much more interesting and valuable than this site, which has no chances to be inscribed in my opinion.

The only part of this nomination I visited is the the town of Steyr. Steyr is one of many nice historical little towns in Central Europe. It's situated on the confluence of the rivers Steyr and Enns which gives it a nice setting. The main square and the old town in general are mainly Baroque (as is most of Austria). Some mediaeval architecture is available too. Steyr makes a nice day trip, but is probably not enough to justify an inscription.

Unesco Website: Iron Trail with Erzberg and the old town of Steyr